These resources can be accessed below by regional bloc (use the maps to navigate to each regional resources page) and by country. 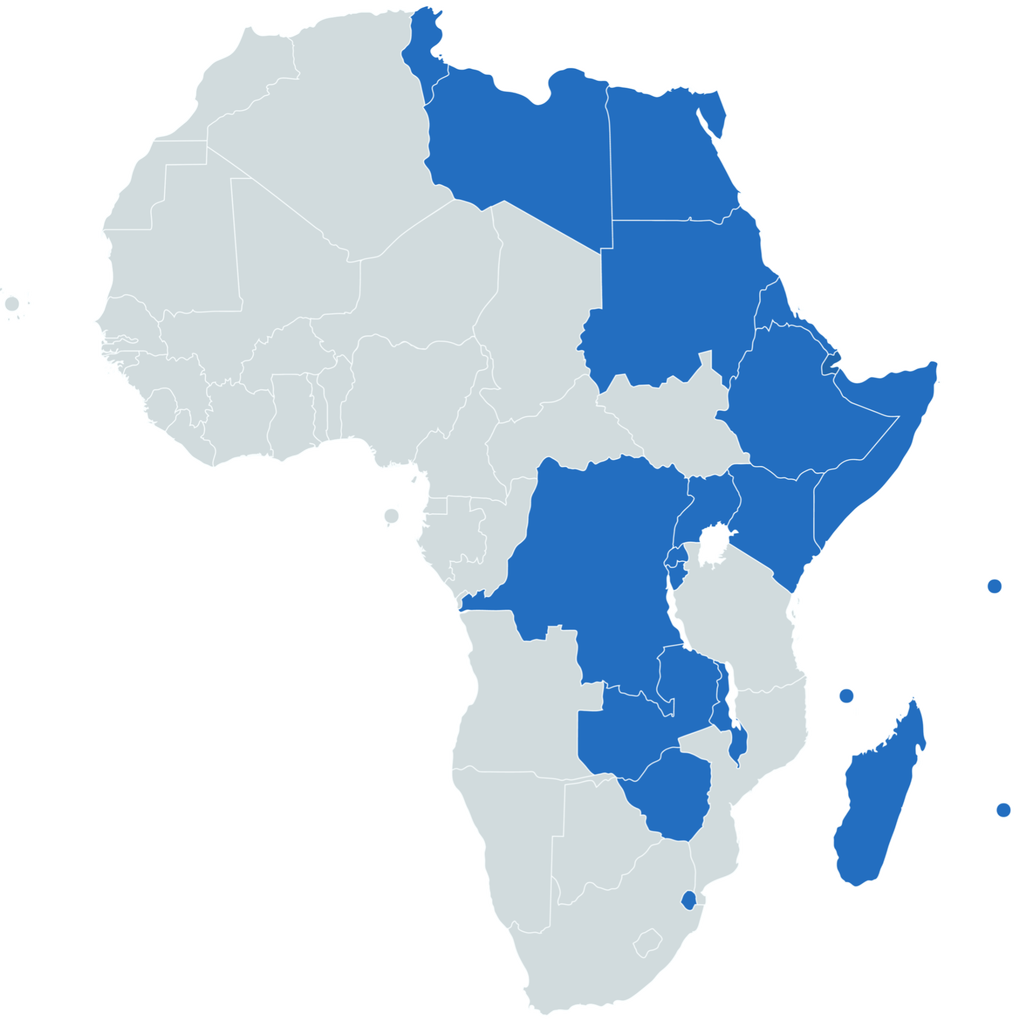 COMESA was established on 8 December 1994, replacing the Preferential Trade Area for Eastern and Southern Africa which was set up in 1981. COMESA has adopted a developmental approach to regional integration, with its main objective being the formation of a large economic and trading unit capable of overcoming some of the barriers that individual states face. COMESA launched a Free Trade Area on 31 October 2000 followed by a Customs Union in June 2009, although the latter is yet to become operational. COMESA is the largest regional economic community in Africa with 21 member states: Burundi, Comoros, Djibouti, DRC, Egypt, Eritrea, Ethiopia, Kenya, Libya, Madagascar, Malawi, Mauritius, Rwanda, Seychelles, Somalia, Sudan, Swaziland, Tunisia, Uganda, Zambia and Zimbabwe. COMESA has concluded a free trade agreement with the United States and several members are negotiating an Economic Partnership Agreement with the EU as part of the Eastern and Southern Africa (ESA) EPA group. 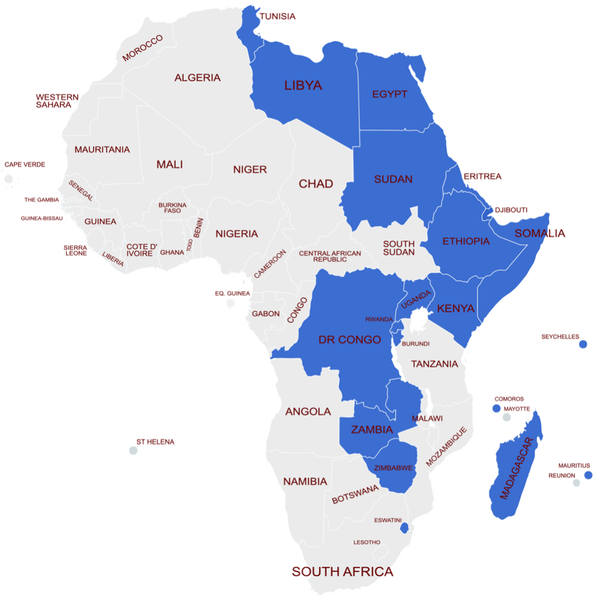 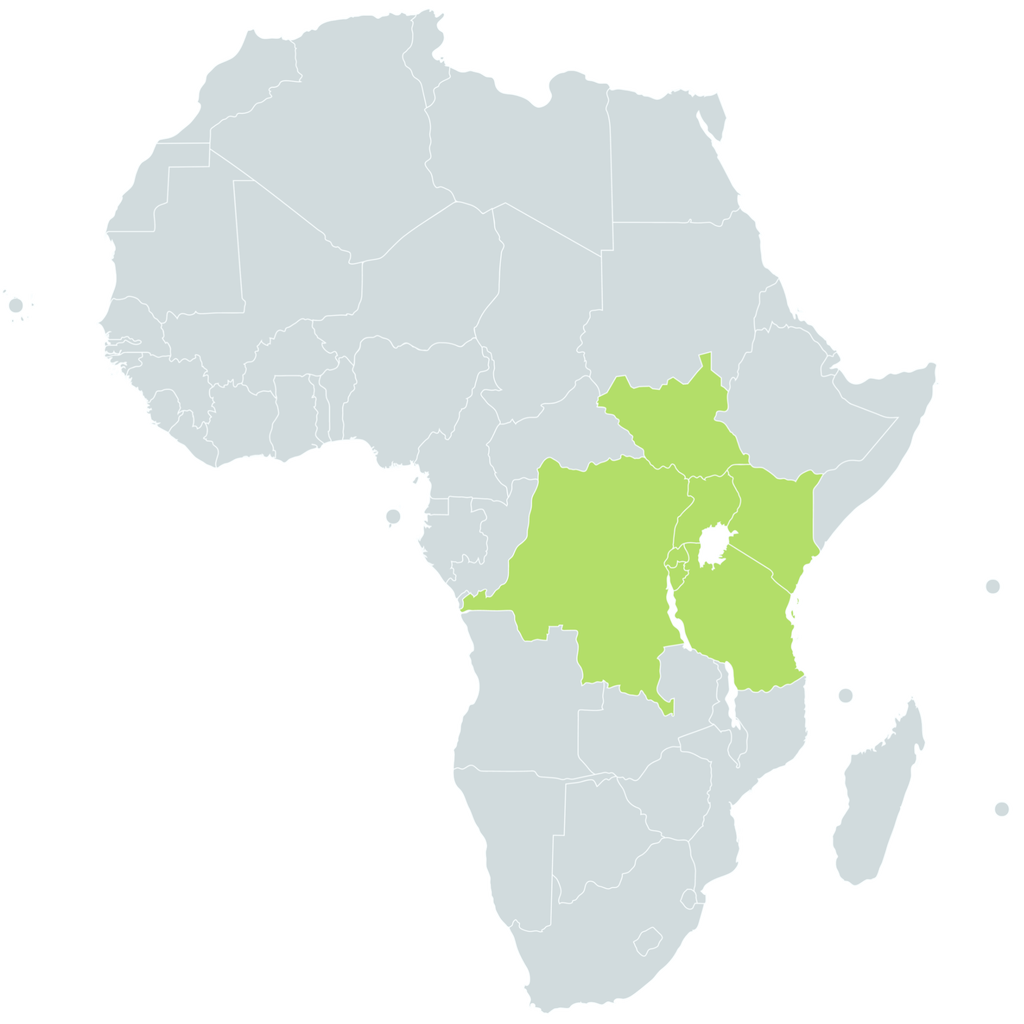 The EAC was established by Treaty as a regional intergovernmental organisation on 7 July 2000. Regional trade integration is a cornerstone of EAC Members’ trade policies. EAC Partner States have agreed to coordinate their economic and other policies with a view to creating conditions favourable for the development and achievement of the objectives of the Community – accelerated, harmonious and balanced development and sustained expansion of economic activities for their mutual benefit. The first regional integration milestone, the EAC Customs Union, was successfully launched in 2005, followed by the establishment of the Common Market in 2010 and implementation of the East African Monetary Union Protocol in 2012. The EAC is working towards establishing a Political Federation of the East African States . The EAC currently consists of seven (7) Member States: Burundi, Kenya, Republic of South Sudan, Rwanda, United Republic of Tanzania, Uganda, and the Democratic Republic of the Congo (joined in April 2022). The EAC has concluded free trade agreements with the United States and an Economic Partnership Agreement with the EU. 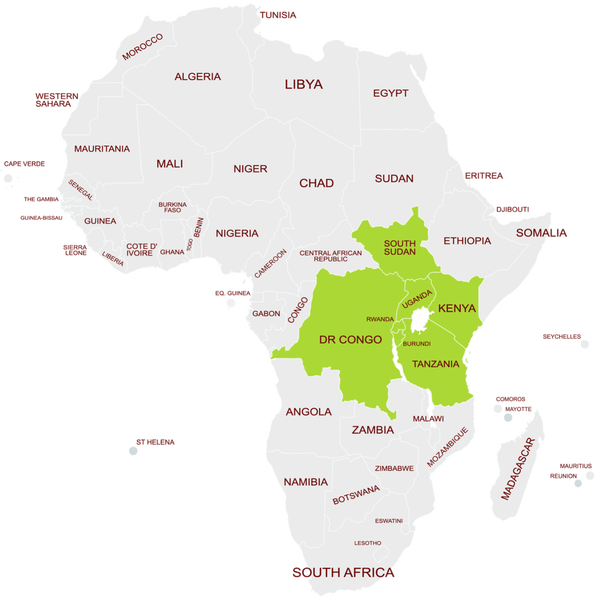 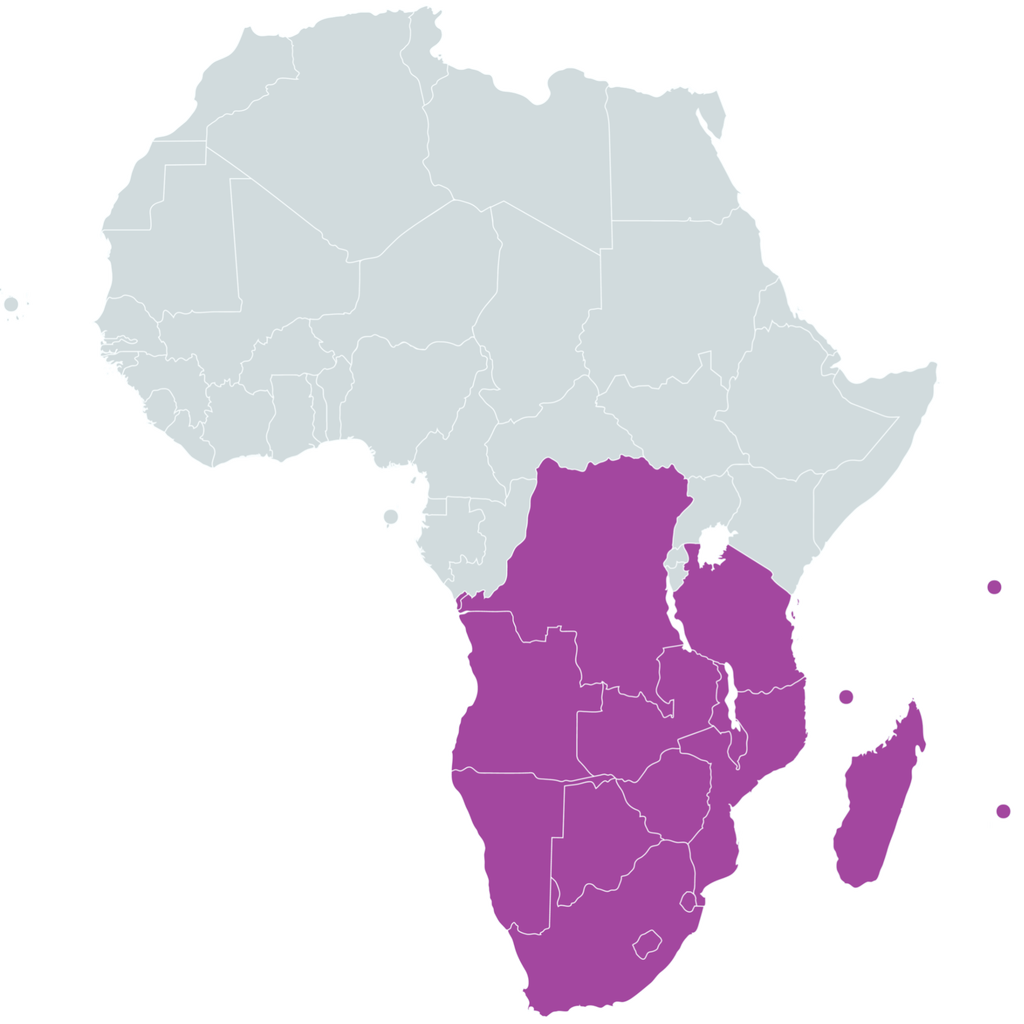 SADC was established on 17 August 1992 with the adoption of the SADC Treaty, redefining the existing Southern African Development Coordinating Conference which was established in 1980. The Treaty sets out the main objectives of SADC – to achieve development and economic growth, alleviate poverty, enhance the standard and quality of life of the peoples of Southern Africa, and support the socially disadvantaged through regional integration. To this end, SADC launched its Free Trade Area in August 2008 as agreed upon by the member states in the SADC Trade Protocol. Further ambitious integration objectives are contained in the Regional Indicative Strategic Development Plan of 2003. Although it is not a legally binding agreement, it enjoys political legitimacy. A revised RISDP (2015-2020) was published by SADC in 2017. SADC currently consists of 16 member states: Angola, Botswana, the Democratic Republic of the Congo, Lesotho, Madagascar, Malawi, Mozambique, Mauritius, Namibia, Seychelles, South Africa, Swaziland, Tanzania, Union of Comoros, Zambia and Zimbabwe. SADC has negotiated an Economic Partnership Agreement with the EU. 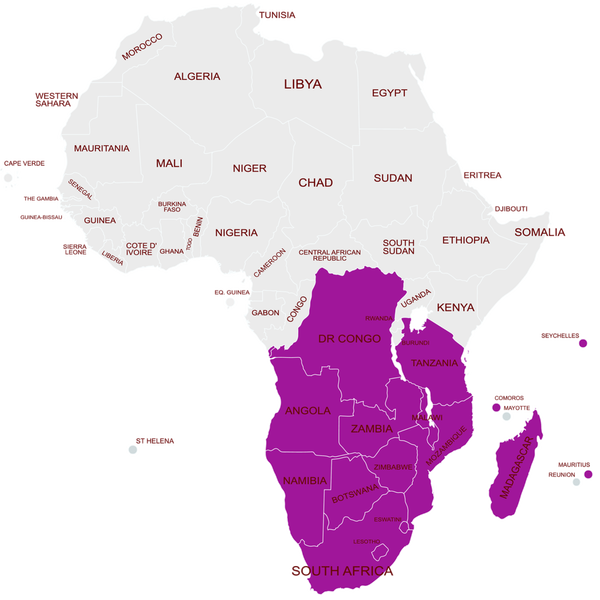 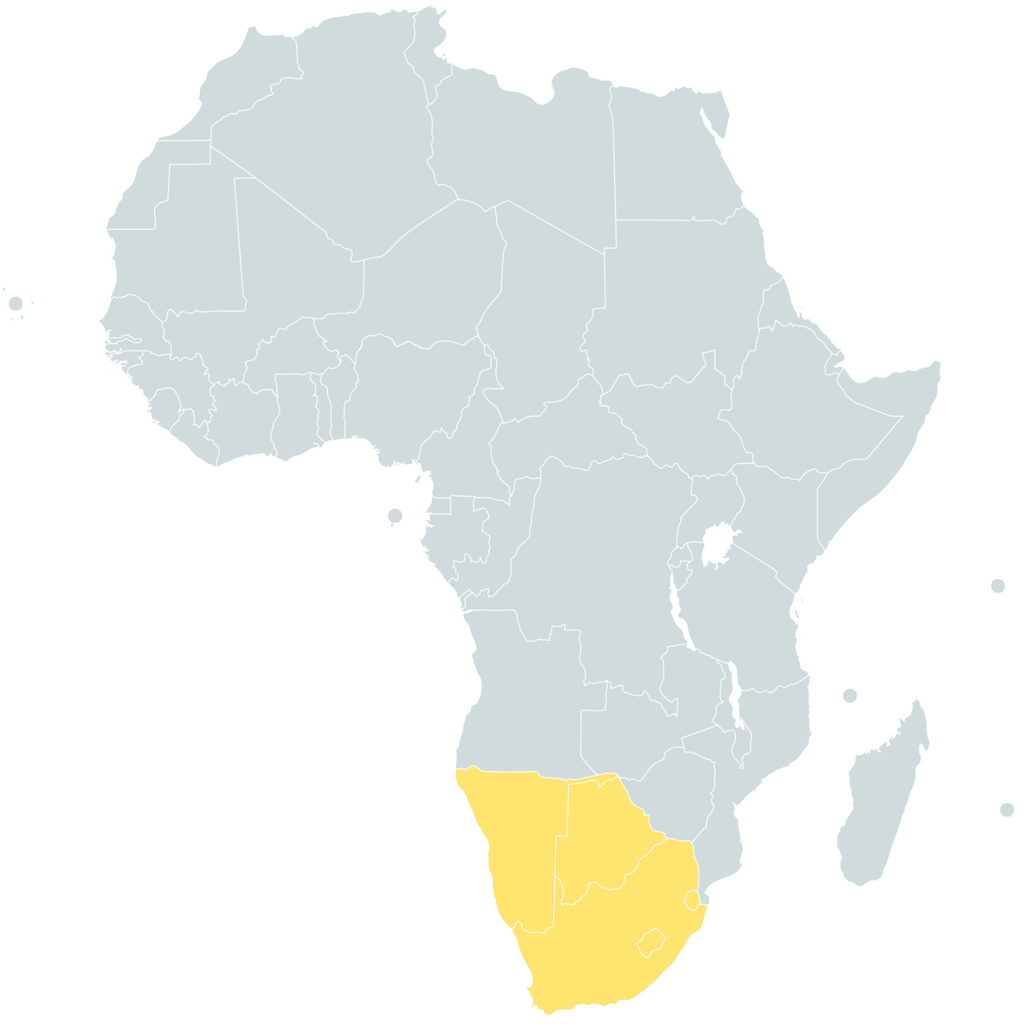 SACU was established in 1910 between Botswana, Lesotho, Eswatini and South Africa. It is the oldest Customs Union in existence. The SACU Agreement was renegotiated in 1969 when Namibia gained independence from South Africa and became a contracting party to the Agreement. It was subsequently renegotiated amongst the five member countries in the mid-1990s which culminated in the signing of the new SACU Agreement in October 2002. Annex 1 of the 2002 Agreement details the Revenue Sharing Formula that is used for determining each Member State’s share out of the Common Revenue Pool. The implementation of the new Revenue Sharing Formula began in 2006. Additionally, SACU has concluded free trade agreements with the United States and the European Free Trade Association (EFTA), as well as negotiating an Economic Partnership Agreement with the EU. 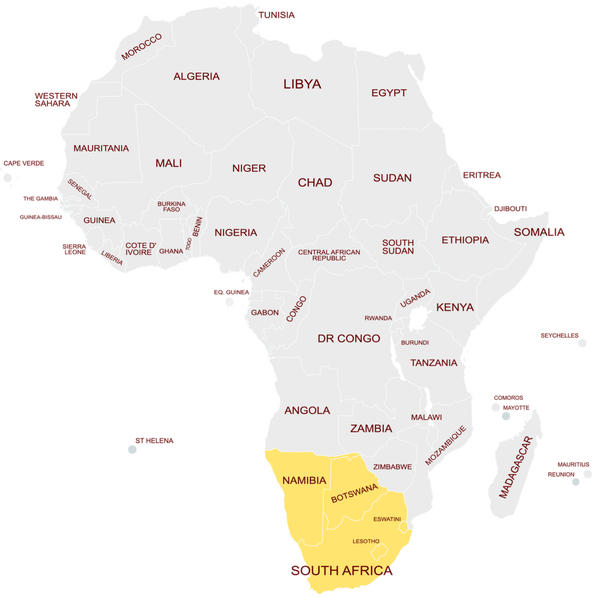 The African Union remains committed to implementing its regional integration agenda through its 8 Regional Economic Communities (RECs): COMESA, EAC, and SADC in the east and southern Africa region, along with ECCAS, ECOWAS, IGAD, AMU, and CEN-SAD covering Central, West and Northern Africa. Although some significant progress has been made to date, the multiplicity of inter-governmental organisations in Africa (currently 14) and overlapping memberships in the RECs poses a challenge for African integration and the implementation of regional agreements. In addition, a COMESA-EAC-SADC Tripartite Free Trade Area (TFTA) has been concluded, and the African Continental Free Trade Area (AfCFTA) Agreement – covering all 55 AU member states – was signed in March 2018. Start of trading under the AfCFTA Agreement began on 1 January 2021. Click on the maps alongside to find out more. 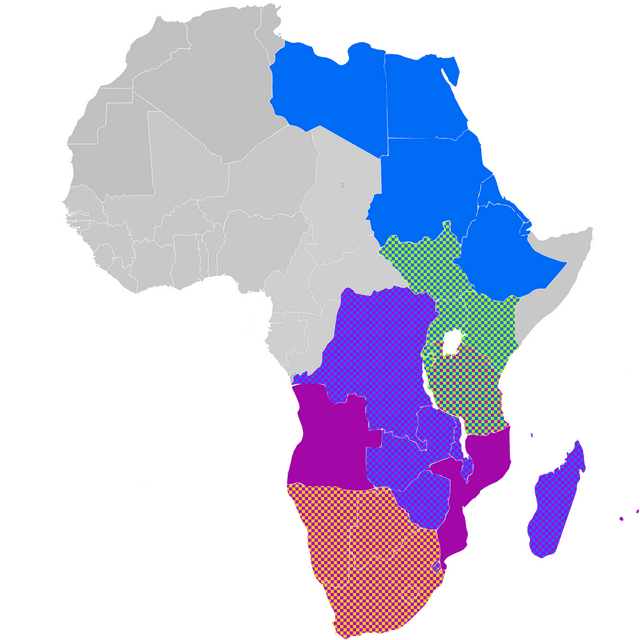 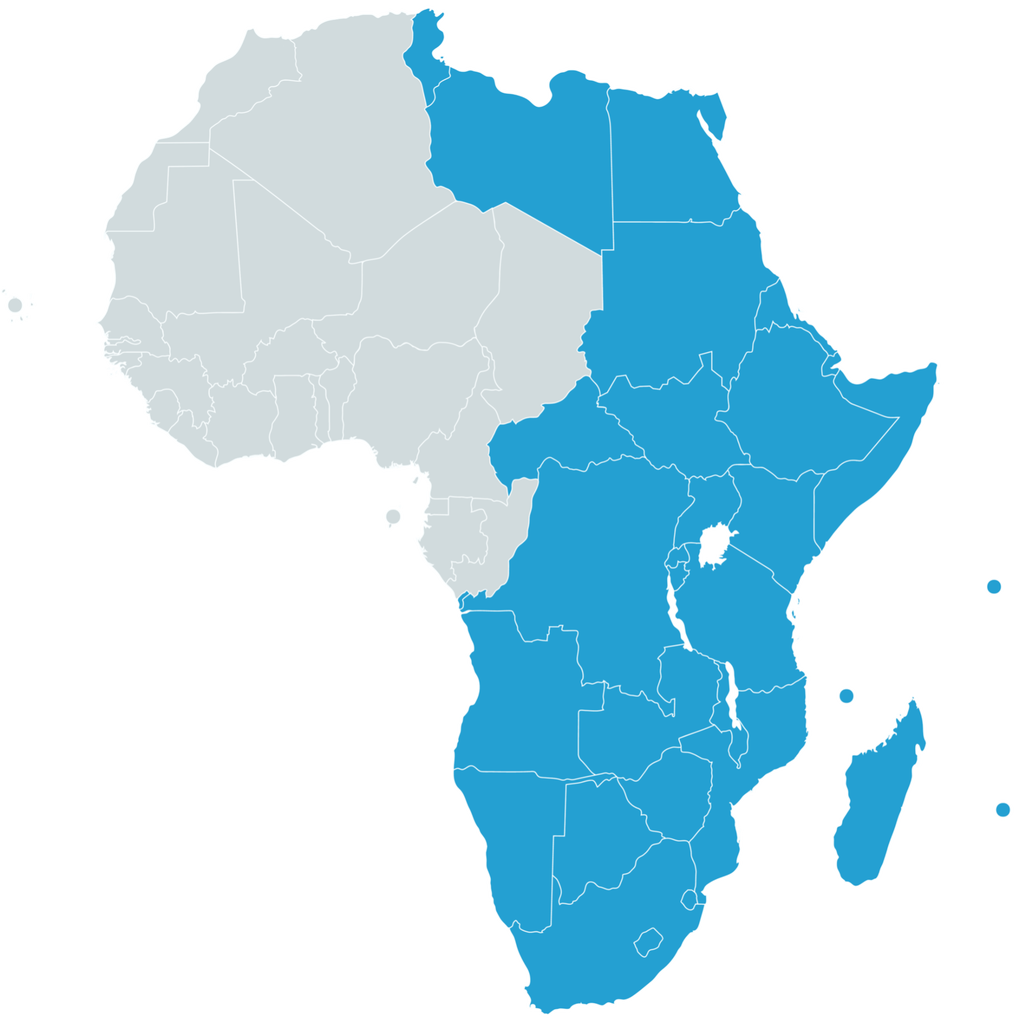 The member states of COMESA, EAC and SADC agreed in October 2008 to negotiate a Tripartite Free Trade Area (TFTA) with the aim of bringing together, in one common market, countries in the three regional economic blocs. It will cover a combined population of 700 million people with an estimated GDP of over US$1.4 trillion. The TFTA was officially launched in Sharm El Sheikh, Egypt on 10 June 2015 where Heads of State and Government had met to conclude outstanding negotiations on rules of origin, trade remedies and tariff offers. However, due to a number of challenges faced in the process, the deadline of June 2016 was not met, and the commencement of Phase II negotiations – covering trade in services and other trade related matters – was delayed. As at February 2020, all Annexes to the Agreement have been finalised, and the negotiation of rules of origin and exchange of tariff offers is near completion. The TFTA Agreement has been signed by 22 of the 27 member countries, which will enter into full force once it has been ratified by 14 countries. To date, it has been both signed and ratified by eight countries – Burundi, Kenya, Egypt, Rwanda, Uganda, South Africa, Namibia and Botswana. 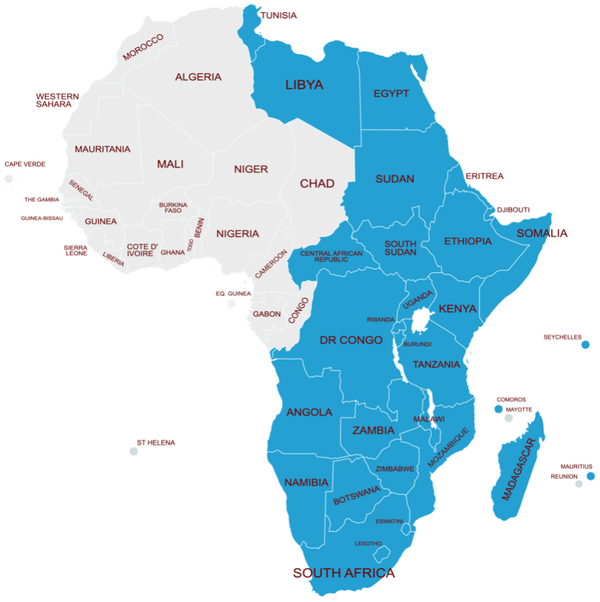 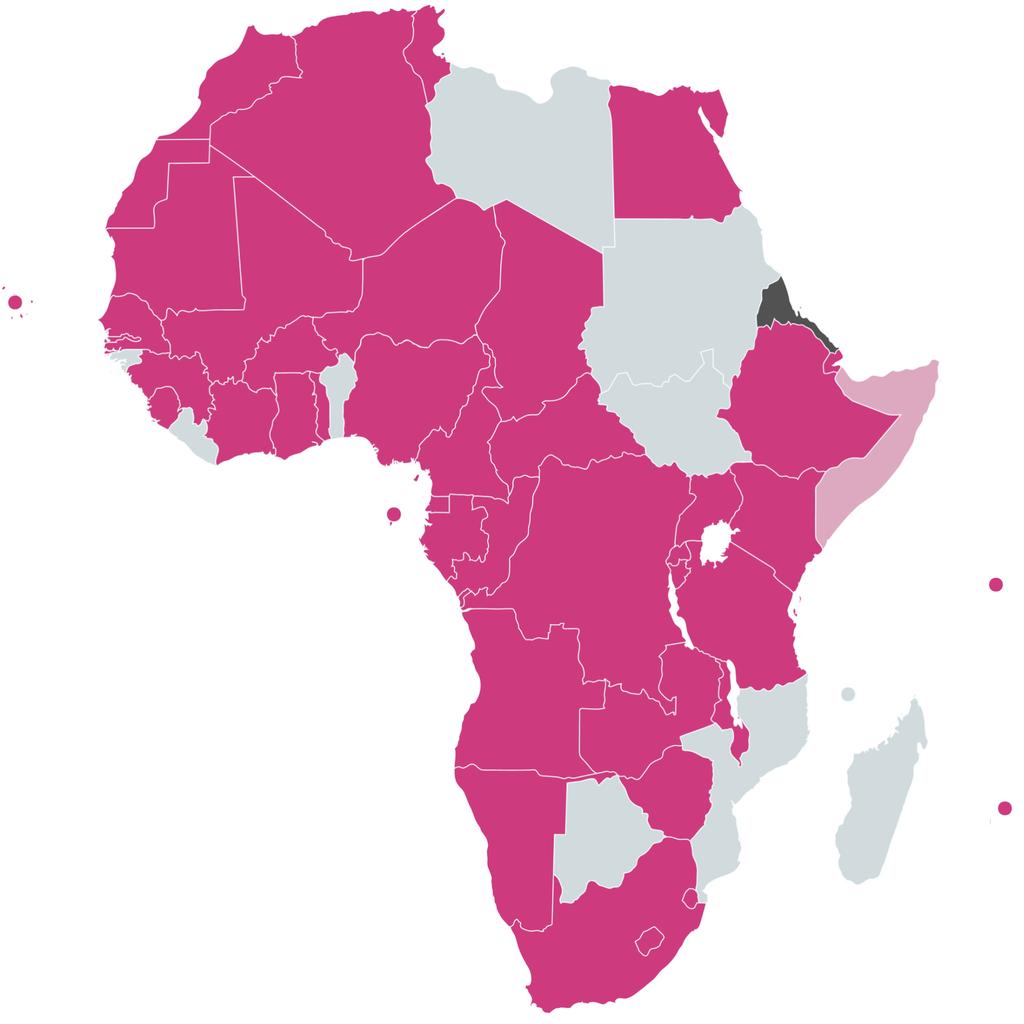 In January 2012, the 18th AU Assembly endorsed a comprehensive framework towards the attainment of developmental regionalism in the continent, through its decision to establish an African Continental Free Trade Area (AfCFTA). The main objectives of the AfCFTA are to create a single continental market for goods and services, with free movement of business persons and investments. Once implemented, the AfCFTA will cover a market of more than 1.2 billion people with a combined GDP of more than US$3.4 trillion. It will be governed by five operational instruments, i.e. the Rules of Origin; the online negotiating forum; the monitoring and elimination of non-tariff barriers; a digital payments system and the African Trade Observatory. To date, the consolidated text of the AfCFTA Agreement has been signed by 54 of the 55 AU member states. Only Eritrea’s signature is now outstanding. Trade under the AfCFTA Agreement began on 1 January 2021, although trade is yet to take place under the AfCFTA regime. As at February 2022, 41 counties have deposited their instruments of ratification with the AUC Chairperson. 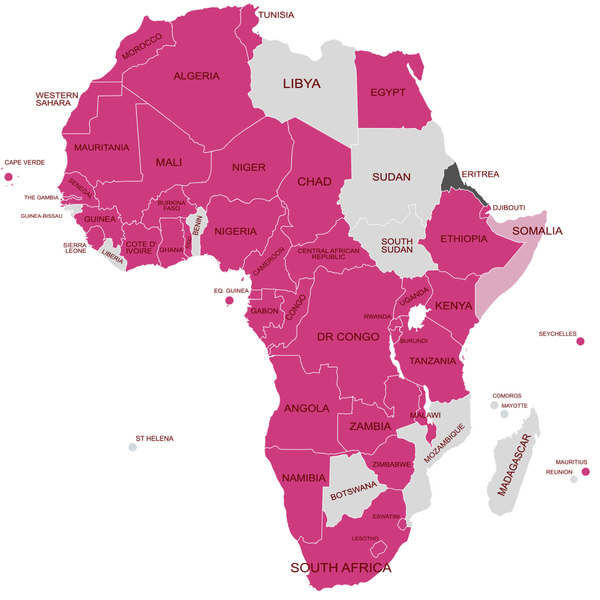 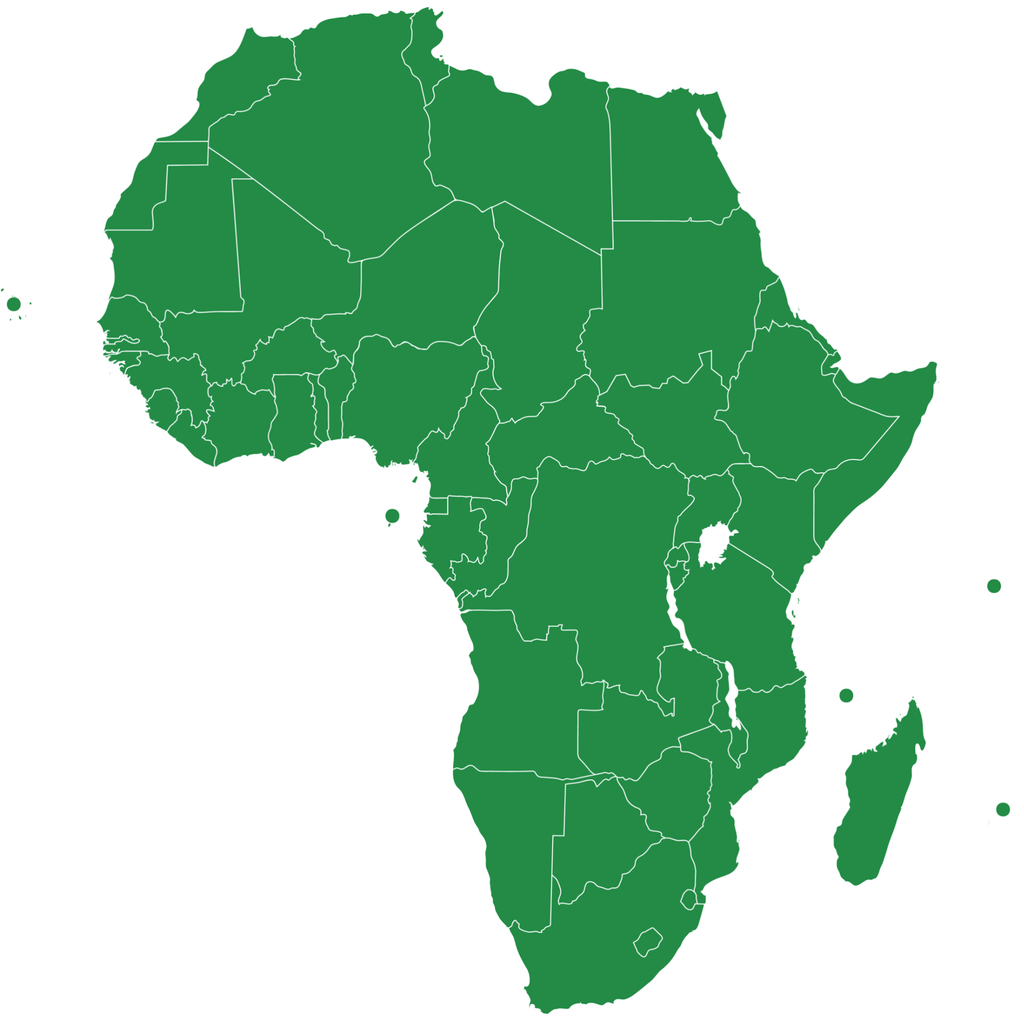 With a view to accelerating the process of economic and political integration in the continent, the Constitutive Act of the African Union was adopted in 2000 at the Lomé Summit and entered into force in 2001. The vision for the AU is to support the empowerment of African states in the global economy while addressing the multifaceted social, economic and political problems facing the continent amidst increasing globalisation. With the adoption of the Treaty Establishing the African Economic Community in 1991 (the ‘Abuja Treaty’), the AU is working towards the establishment of a single African Common Market through six successive stages, using the Regional Economic Communities (RECs) as building blocks. Agenda 2063 was formally adopted in January 2015 as a strategic framework for the socioeconomic transformation of the continent over the next 50 years. It encapsulates not only Africa’s aspirations for the future but also identifies key Flagship Programmes which can boost Africa’s economic growth and development and lead to the rapid transformation of the continent. The AU currently consists of 55 member states. 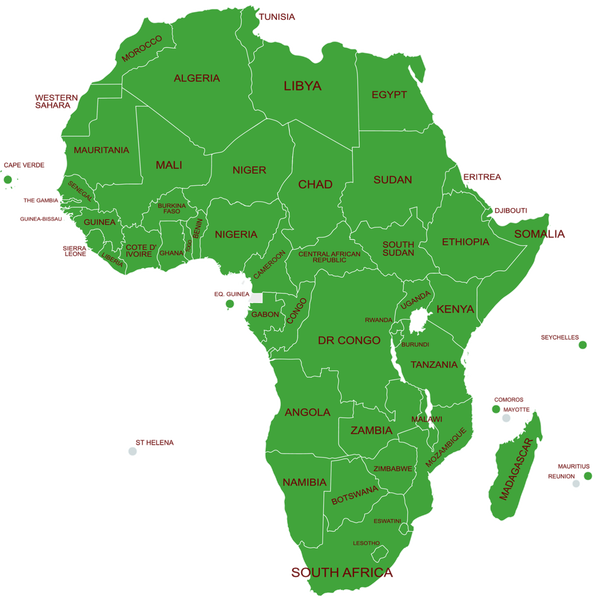 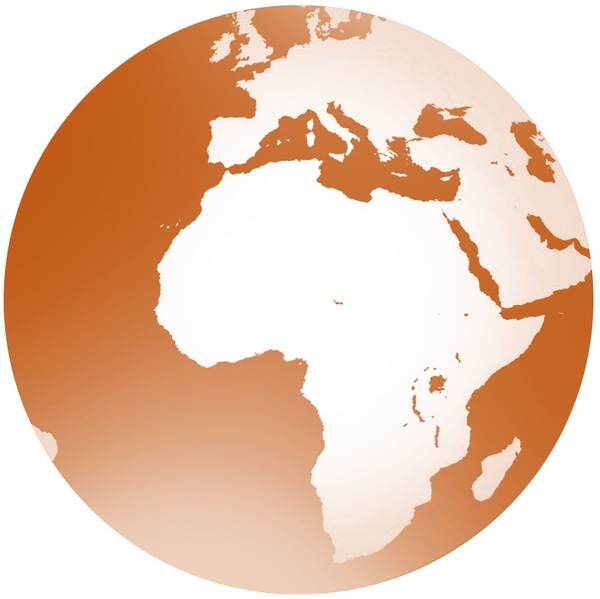 The challenges of the evolving international trade landscape and global economy, and how trade policy in the 21st century can be used to promote the effective integration and upgrading of developing countries, have meant that the nature of Africa’s trading relationships has been undergoing significant shifts. While trade with its traditional trading partners, particularly the European Union and the United States, has been declining, trade ties with emerging economies and global players, notably the BRICS (Brazil, Russia, India, China and South Africa), has been steadily increasing. The negotiation of Economic Partnership Agreements (EPAs) with the EU, the United Kingdom’s exit from the EU (Brexit), and multilateral trade developments at the World Trade Organisation (WTO) also have implications for Africa’s trade. Click on the map below to find out more.