The changing nature of economic competitiveness in a world that is becoming increasingly transformed by new, digital technologies is creating a new set of challenges for governments and businesses, which collectively run the risk of having a negative impact on future growth and productivity. This is the key finding of the World Economic Forum’s Global Competitiveness Report, published on 16 October 2018.

According to the report, which in 2018 uses a brand new methodology to fully capture the dynamics of the global economy in the Fourth Industrial Revolution, many of the factors that will have the greatest impact in driving competitiveness in the future have never been the focus of major policy decisions in the past. These include idea generation, entrepreneurial culture, openness, and agility.

The new tool maps the competitiveness landscape of 140 economies through 98 indicators organised into 12 pillars. For each indicator, using a scale from 0 to 100, it indicates how close an economy is to the ideal state or “frontier” of competitiveness. When combining these factors, the United States achieves the best overall performance with a score of 85.6, ahead of Singapore and Germany. The average score for the world is 60, 40 points away from the frontier.

One unifying theme among the world’s most competitive economies is that they all possess considerable room for improvement. For example, while the report’s Global Competitiveness Index finds that Singapore is the most ‘future-ready’ economy, it trails Sweden when it comes to having a digitally skilled workforce. Switzerland, meanwhile, has the most effective labour for reskilling and retraining policies and US companies are the fastest when it comes to embracing change.

One of the report’s most concerning findings is the relative weakness across the board when it comes to mastering the innovation process, from idea generation to product commercialization. Here, 103 countries score lower than 50 in this area of the index which is topped by Germany, followed by the United States and Switzerland. The report notably finds that attitude towards entrepreneurial risk is the most positive in Israel and tends to be negative in several East Asian economies. Canada has the most diverse workforce and Denmark’s corporate culture is the least hierarchical, both critical factors for driving innovation.

“Embracing the Fourth Industrial Revolution has become a defining factor for competitiveness. With this Report, the World Economic Forum proposes an approach to assess how well countries are performing against this new criterion. I foresee a new global divide between countries who understand innovative transformations and those that don’t. Only those economies that recognize the importance of the Fourth Industrial Revolution will be able to expand opportunities for their people,” said Klaus Schwab, Founder and Executive Chairman, World Economic Forum.

Openness must be complemented by inclusion

At a time of escalating trade tensions and a backlash against globalization, the report also reveals the importance of openness for competitiveness. For example, those economies performing in indicators that denote openness such as low tariff and non-tariff barriers, ease of hiring foreign labour and collaboration in patent application among others also tend to perform well in terms of innovation and market efficiency. This data suggests that global economic health would be positively impacted by a return to greater openness and integration. However, it is critical that policies be put in place to improve conditions of those adversely affected by globalization within countries.

The report also presents a strong argument that redistributive policies, safety nets, investments in human capital, as well as more progressive taxation aimed at addressing inequality do not need to compromise an economy’s levels of competitiveness. With no inherent trade-off between competitiveness and inclusion, it is possible to be pro-growth and inclusive at the same time. For example, workers in the Index’s ten most competitive economies work on average five hours less per week than workers in the three BRICS economies – Brazil, India and Russia – for which working time data is available.

A key message from the report is the need for a broad-based approach to raising competitiveness – a strong performance in one area cannot make up for a weak performance in another. This is especially true when it comes to innovation: while it is true that a strong focus on technology can provide leapfrogging opportunities for low and middle income countries, governments must not lose sight of ‘old’ developmental issues, such as governance, infrastructure and skills. In this light one worrying factor thrown up by this year’s Index is the fact that, for 117 of the 140 economies surveyed, quality of institutions remains a drag on overall competitiveness.

“Competitiveness is neither a competition nor a zero-sum game – all countries can become more prosperous. With opportunities for economic leapfrogging, diffusion of innovative ideas across borders and new forms of value creation, the Fourth Industrial Revolution can level the playing field for all economies. But technology is not a silver bullet on its own. Countries must invest in people and institutions to deliver on the promise of technology,” said Saadia Zahidi, Member of the Managing Board and Head of the Centre for the New Economy and Society. 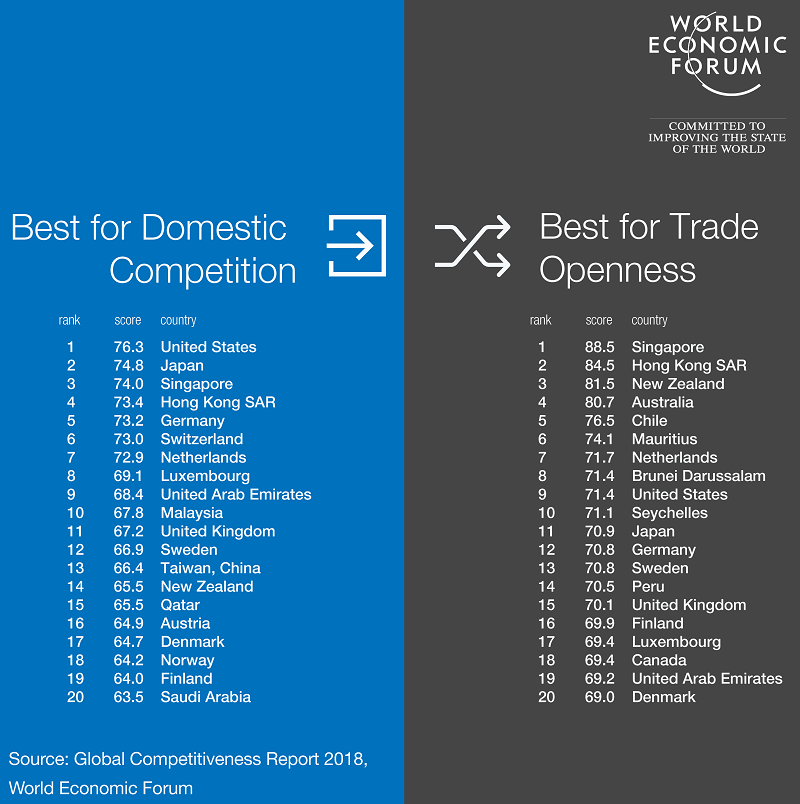 With a score of 85.6 out of 100, the United States is the country closest to the frontier of competitiveness. It notably leads the Business dynamism pillar, thanks to its vibrant entrepreneurial culture, the Labour market pillar (score of 81.9 out of 100) and the Financial system (92.1) pillar. These are among the several factors that contribute to making the US’ innovation ecosystem one of the best in the world (86.5, 2nd behind Germany). The country’s institutional framework also remains relatively sound (74.6, 13th).

However, there are indications of a weakening social fabric (63.3, down from 65.5) and worsening security situation (79.1, 56th) – the United States has a homicide rate five times the advanced economies’ average. It is far from the frontier in areas such as checks and balances (76.3, 40th), judicial independence (79.0, 15th), and corruption (75.0, 16th). The country also lags behind most advanced economies in the Health pillar, with healthy life expectancy at 67.7 years (46th), three years below the average of advanced economies, and six years less than Singapore and Japan. Finally, ICT adoption is relatively low compared to other advanced economies, including aspects such as mobile-broadband subscriptions and internet users. With a score of 71.2, the United States trails Korea by a full 20 points.

Singapore ranks second in the overall rankings (score of 83.5), with openness as the defining feature of this global trading hub and one of the main drivers of its economic success. The country also leads the infrastructure pillar, with a nearly perfect score of 95.7, thanks to its world-class transport infrastructure and connectivity.

Besides Singapore and Japan, Hong Kong SAR (7th, 82.3) is the third economy from East Asia and the Pacific region in the top ten, confirming the widely held view that overall growth momentum in the region is set to last. These three economies boast world-class physical and digital infrastructure and connectivity, macroeconomic stability, strong human capital, and well-developed financial systems.

Australia (14th, 78.9) and Korea (15th, 78.8) are among the top 20. The biggest gap in this region lies in the development of an innovation ecosystem – New Zealand ranks 20th on the Innovation Capability pillar, while the Republic of Korea ranks 8th. Emerging markets such as Mongolia (99th , 52.7), Cambodia (110th, 50.2) and Lao PDR (112th, 49.3) are only half way to the frontier, making them vulnerable to a sudden shock, such as a faster-than-expected rise in interest rates in advanced economies and escalating trade tensions.

Of the BRICS grouping of large merging markets, China is the most competitive, ranking 28 in the Global Competitiveness Index with a score of 72.6. It is followed by Russia which is ranked 43. These are the only two in the top 50. Next is India, which ranks 58, up five places on 2017: with a score of 62, it registers the largest gain of any country in the G20. India is followed by South Africa, which falls 5 places this year to 67. Last is Brazil, which slips 3 places to 72.

Europe is made up of a very competitive north-west, a relatively competitive south-west, a rising north-east region and a lagging south-east. Despite continuing fragility from recent political shifts, the continent’s basic competitiveness factors, such as health, education, infrastructure and skills, are firmly in place. Sweden (9th, 81.7) is the highest ranked of the Nordic economies, while France (17th, 78.0) is among the top 20. The greatest disparities in the region lie in national innovation ecosystems, with countries in Eastern Europe and the Balkans lacking basic innovation infrastructure, while countries such as Germany and Switzerland set the global standards for innovation.

Chile (33rd, 70.3) leads the Latin America and the Caribbean region by a wide margin, ahead of Mexico (46th, 64.6) and Uruguay (53rd, 62.7). Venezuela (127th, 43.2) and Haiti (138th, 36.5) close the march. The region’s competitiveness remains fragile and could be further jeopardized by a number of factors including increased risk from trade protectionism in the United States; spillover of Venezuela’s economic and humanitarian crisis; policy uncertainty from elections in the region’s largest economies, and disruptions from natural disasters threatening the Caribbean. Insecurity and weak institutions are two of the biggest challenges for most countries.

Competitiveness performance in the Middle East and North Africa remains diverse, with Israel (20th, 76.6) and the United Arab Emirates (27th, 73.4), leading the way in the region. Saudi Arabia is in 39th position with a score of 67.5 out of 100. A focus on intra-region connectivity, in combination with improvements in ICT readiness and investment in human capital would improve the region’s capacity to innovate, foster business dynamism and increase its competitiveness performance.

About the Global Competitiveness Index 4.0 methodology

Building on four decades of experience in benchmarking competitiveness, the World Economic Forum’s Global Competitiveness Index 4.0 is a new composite indicator that assesses the set of factors that determine an economy’s level of productivity – widely considered as the most important determinant of long-term growth. The GCI 4.0 framework is built around 12 main drivers of productivity. These pillars are: Institutions, Infrastructure; Technological readiness; Macroeconomic context; Health; Education and skills; Product market; Labor market; Financial system; Market size; Business dynamism; and Innovation. They comprise 98 individual indicators. Further details on methodology can be found here.