A moderate economic growth recovery is projected in Africa for 2017-18, even as the global economy continues to be trapped in a prolonged period of slow growth, according to the United Nations World Economic Situation and Prospects (WESP) 2017 Report released today.

The report shows that world gross product grew by just 2.2 per cent in 2016, marking its slowest pace of expansion since the Great Recession of 2009. Global growth is projected to see a moderate improvement to 2.7 per cent in 2017 and 2.9 per cent in 2018, but this is more an indication of economic stabilization than a signal of a robust revival of global demand.

Against this backdrop, Africa is expected to see a recovery in growth, with GDP expanding by 3.2 per cent in 2017 and 3.8 per cent in 2018, up from 1.7 per cent in 2016. The projected increase in global commodity prices will ease fiscal and external pressures for commodity exporters, but a strong growth rebound in these countries appears unlikely. Several other countries, such as those in the East African Community and some Western African economies, enjoy a more favourable growth outlook.

The report notes large differences in growth prospects among the five African subregions. East Africa is positioned to remain the fastest-growing subregion, with aggregate GDP projected to expand by about 6 per cent in 2017 and 2018, helped by the rapid expansion of domestic markets and strong spending on infrastructure.

West Africa is expected to see growth rebound from 0.1 per cent in 2016 to 3.1 per cent in 2017, as the projected increase in oil prices eases severe fiscal and external pressures in Nigeria. For several other West African countries, such as Cote d’Ivoire, Ghana and Senegal, the growth outlook remains strong, underpinned by large infrastructure investments and an improved domestic business climate.

Meanwhile, growth in North Africa is projected to accelerate from 2.6 per cent in 2016 to 3.5 per cent in 2017, contingent on a gradual improvement in the security situation.

The growth outlook for Southern Africa is relatively subdued, with economic activity projected to improve modestly to 1.8 per cent in 2017 and 2.6 per cent in 2018. While South Africa is expected to benefit from a moderate recovery in the agriculture and mining sector, political uncertainty may weigh on investor sentiments.

Inflation dynamics across the region

The report also takes note of marked differences in the inflation dynamics across the region. For the commodity-dependent economies, the weakening of domestic currencies fuelled imported inflation. The adverse impact of drought conditions and rising electricity tariffs added further upward pressure on inflation. In Angola, Mozambique and Nigeria, inflation reached multi-year highs. As high inflationary pressures are expected to persist in these economies, monetary policy stances will likely remain tight.

In contrast, inflation in the region’s net oil importers stabilised or slowed in 2016 and pressures are expected to remain subdued going forward. In several of these countries, including Botswana, Kenya and Morocco, central banks reduced policy rates in 2016 in a bid to stimulate growth.

The report cautions that there are significant risks to the global and the regional outlook. Among other issues, the report highlights the high degree of uncertainty in the international policy environment and elevated foreign currency-denominated debt levels as key downside risks that may derail global growth.

For Africa, the report identifies renewed weakness in commodity prices and a sharper-than-expected growth moderation in China as major risks. On the domestic side, an escalation of security concerns and political unrest could deter foreign investment and severely disrupt economic activity in some countries.

The report calls for a more balanced policy approach to not only restore robust growth in the medium term, but also to achieve greater progress on sustainable development. Given that commodity prices are projected to increase only modestly, the report also underscores the need for African economies to further strengthen policy measures to tackle domestic structural weaknesses, including measures to accelerate economic diversification, rebuild policy buffers and promote stronger job creation.

Although a modest global recovery is projected for 2017-18, the world economy has not yet emerged from the period of slow growth, characterised by weak investment, dwindling trade and flagging productivity growth, according to the United Nations World Economic Situation and Prospects (WESP) 2017 report launched on Tuesday.

The report states that the world economy expanded by just 2.2 per cent in 2016, the slowest rate of growth since the Great Recession of 2009. World gross product is projected to grow by 2.7 per cent in 2017 and 2.9 per cent in 2018, a slight downward revision from the forecasts made last May.

Launching the report at the UN Headquarters in New York, Mr. Lenni Montiel, Assistant Secretary-General for Economic Development, United Nations Department of Economic and Social Affairs, underscored the “need to redouble the efforts to bring the global economy back on a stronger and more inclusive growth path and create an international economic environment that is conducive to sustainable development.”

According to the report, the moderate improvement expected for 2017/18 is more an indication of economic stabilization than a signal of a robust and sustained revival of global demand. As commodity prices trend higher, commodity-exporting economies are likely to see some recovery in growth.

Developing countries continue to be the main drivers of global growth, accounting for about 60 per cent of the world’s gross product growth in 2016-18. East and South Asia remain the world’s most dynamic regions, benefiting from robust domestic demand and supportive macroeconomic policies.

The report projects that growth in the developed economies will slightly improve in 2017, but headwinds arising from weak investment and policy uncertainty continue to constrain economic activity.

GDP growth in the least developed countries (LDCs) is projected to remain well below the Sustainable Development Goals (SDGs) target of at least 7 per cent. This represents a key issue to address if the SDGs overall are to be attained. The report notes, specifically, that under the current growth trajectory and assuming no decline in income inequality, nearly 35 per cent of the population in LDCs may remain in extreme poverty by 2030.

The report identifies prolonged weak investment as a major cause of the slowdown in global growth. Many economies have experienced a marked downturn in private and public investment in recent years, particularly in the oil and extractive industries. In commodity-exporting countries, Governments have curtailed much-needed public investment in infrastructure and social services, in response to sharp revenue losses. At the same time, labour productivity growth has slowed markedly in most developed economies and in many large developing and transition economies.

The report stresses the importance of investment in new capital as a driver of technological change and efficiency gains. In particular, it concludes that investment in key areas, such as research and development, education and infrastructure, can serve to promote social and environmental progress, while also supporting productivity growth.

The report highlights some positive developments related to environmental sustainability. The level of global carbon emissions has stalled for two consecutive years. This reflects the declining energy intensity of economic activities and the rising share of renewables in the overall energy structure, but also slower economic growth in some major emitters.

The report found that renewable energy investment in the developing countries exceeded that of the developed countries in 2015. However, the report also warns that without concerted policy efforts from both the public and private sector, the recent improvements in emissions mitigation could easily reverse.

The report cautions that the global outlook faces significant uncertainties and risks. A high degree of uncertainty is identified in the international policy environment and elevated foreign currency-denominated debt levels as key downside risks that may derail the already modest global growth prospects.

Given the close linkages between demand, investment, trade and productivity, the extended episode of weak global growth may prove self-perpetuating in the absence of concerted policy efforts to revive investment and foster a recovery in productivity. The report notes that many countries continue to depend excessively on monetary policy to support growth.

In the context of a challenging economic and financial environment, a more balanced policy approach is required to not only restore a healthy medium-term growth trajectory, but also to achieve greater progress on sustainable development.

The global economy needs policy measures that move beyond demand management. These measures need to be fully integrated with structural reforms that target the various aspects of sustainable development, including poverty, inequality and climate change. 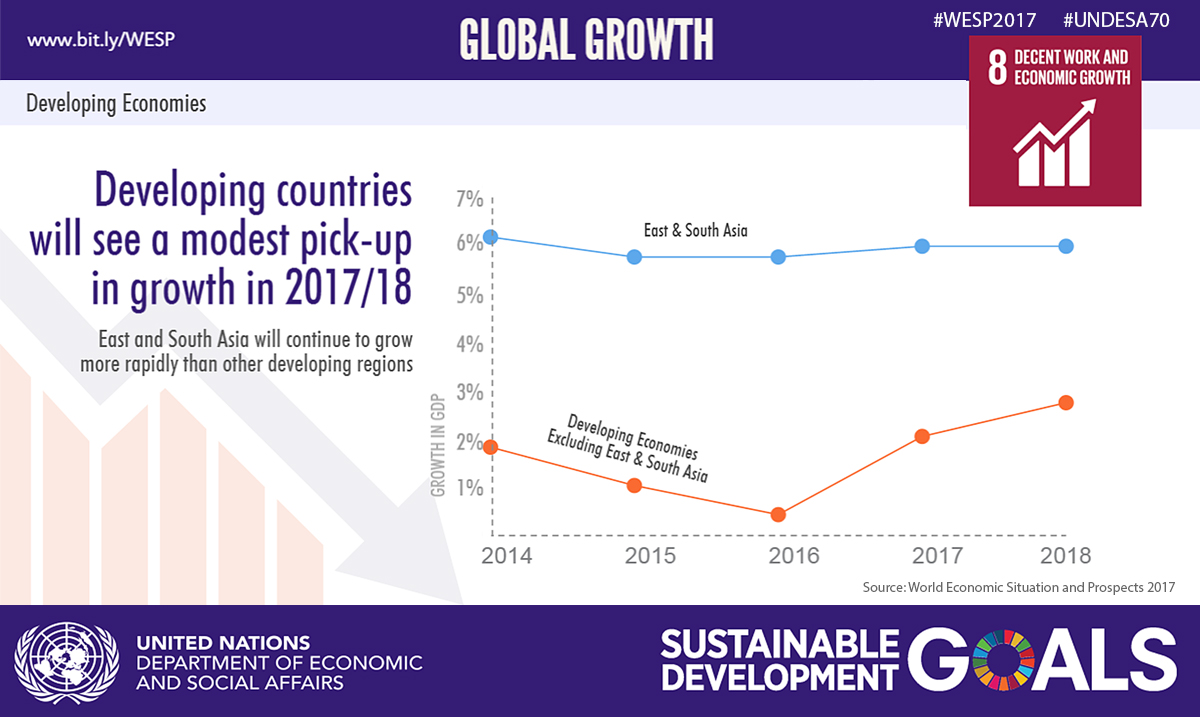 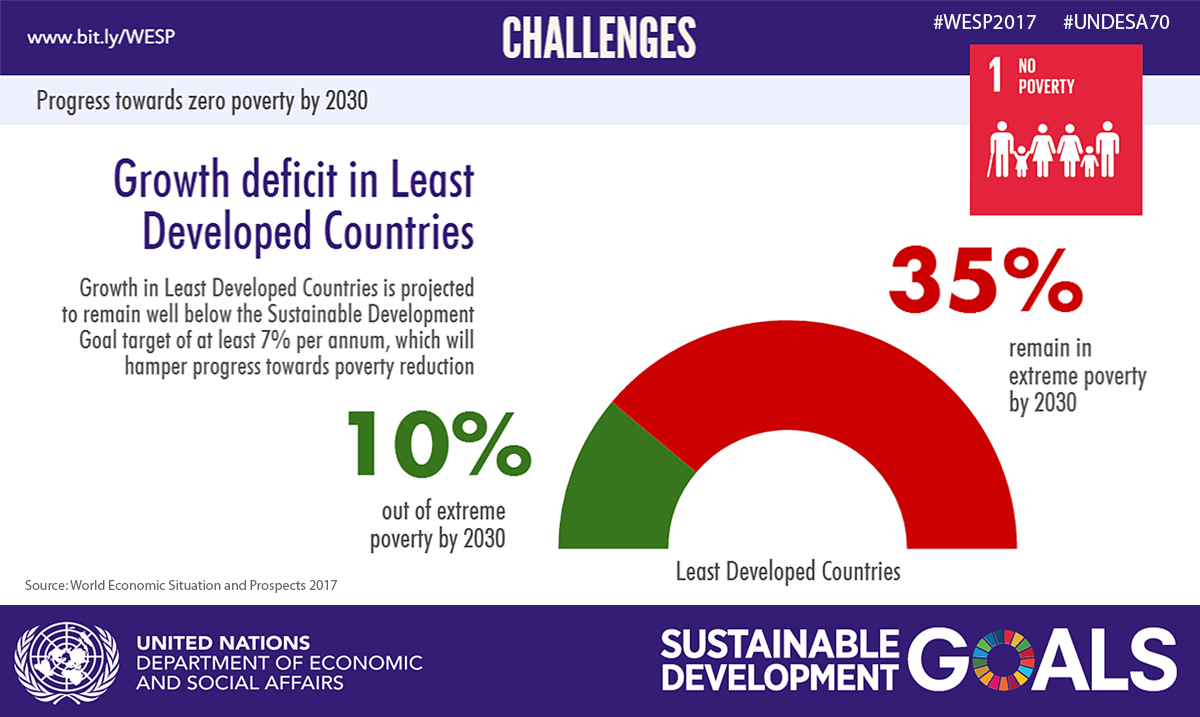 The World Economic Situation and Prospects report is the UN’s flagship publication on expected trends in the global economy. The WESP is produced annually by the UN Department of Economic and Social Affairs (UN/DESA), the UN Conference on Trade and Development (UNCTAD), the five UN regional commissions and the World Tourism Organisation (UNWTO). For more information, please visit: http://bit.ly/WESP.