On 16-17 April 2018, tralac – in collaboration with Zimbabwe National Chamber of Commerce (ZNCC) and Zimbabwe Network of Customs and Excise Experts – hosted an AfCFTA Awareness Workshop in Harare, Zimbabwe. The workshop brought together participants from government, private sector and civil society to examine the newly launched African trade pact.

Trudi Hartzenberg, tralac Executive Director and Professor Gerhard Erasmus, tralac Associate commenced the Workshop by taking stock of the AfCFTA negotiation process. They discussed what has happened since the January 2012 Assembly of the African Union, when African leaders took a decision to establish the AfCFTA. They provided an update of the legal instruments signed at the 10th Extraordinary African Union Summit on 21 March 2018 in Kigali, Rwanda. These included the Agreement Establishing the AfCFTA, the Kigali Declaration (which expresses a commitment to the ongoing AfCFTA negotiation process) and the Protocol on Free Movement of Persons, Right to Residence and Right to Establishment.

They noted that the negotiations are still ongoing, with a built-in agenda for the completion of phase 1, having been adopted. Phase 2 of the negotiations which will cover there is still outstanding work including the built-in agenda as well as phase 2 of the negotiations competition policy, investment and intellectual property rights is scheduled to start in 2019. They also noted the link between the AfCFTA and Regional Economic Communities and the Tripartite Free Trade Area (TFTA). Tariff liberalisation and rules of origin negotiations in the TFTA are still in process. The RECs will continue to exist, and trade amongst their member states will continue according to their trade regimes.

Gerhard examined the legal and technical issues of the AfCFTA including specifically the architecture of the AfCFTA, signature, ratification and entry into force of the AfCFTA Agreement. He also focused on dispute resolution in the AfCFTA.

Daniel Ndlela of Zimconsult facilitated a discussion on Zimbabwe and the AfCFTA. Zimbabwe’s domestic trade governance developments particularly trade policy, legal and institutional developments were examined. Implementation of AfCFTA, the role of domestic institutions such as the Zimbabwe Revenue Authority (ZIMRA) and the Ministry of Commerce and Industry were discussed in detail.

Private sector representatives from the Confederation of Zimbabwe Industries, ZNCC and Buy Zimbabwe shared their perspectives on the AfCFTA. The representatives concurred that the AfCFTA is significant for Zimbabwe, but were concerned about the lack of competitiveness in the Zimbabwean business community.

On Day 2, Elisha Tshuma, tralac alumnus, who assisted with the planning of this Workshop, provided a recap of Day 1’s discussions. He highlighted that the establishment of the AfCFTA is an extremely important step towards Africa’s integration agenda. Elisha encouraged the local businesses to be involved in the AfCFTA process, where important issues such as tariffs and rules of origin are still to be negotiated.

Participants representing Zimbabwe’s small and medium-sized enterprises (SMEs), women and youth in business, consumers and labour provided their views on the AfCFTA. Participants identified some of the challenges faced by these groups in cross-border trade including, among others, access to finance and information, and corruption.

Gerhard and Trudi considered Zimbabwe’s trade profile, noting its membership of SADC and COMESA, as well as global trade governance developments. They examined developments related to the East and Southern African Economic Partnership Agreement (ESA EPA), Brexit, the African Growth and Opportunity Act (AGOA) and the World Trade Organisation (WTO) Trade Facilitation Agreement. They posed important questions: What are the plans for re-inventing Zimbabwe? Should Zimbabwe prioritise the TFTA and AfCFTA? Are local laws, institutions and policies in place? How do Services and Trade Facilitation feature in Zimbabwe’s trade agenda? Will the Rule of Law be respected? 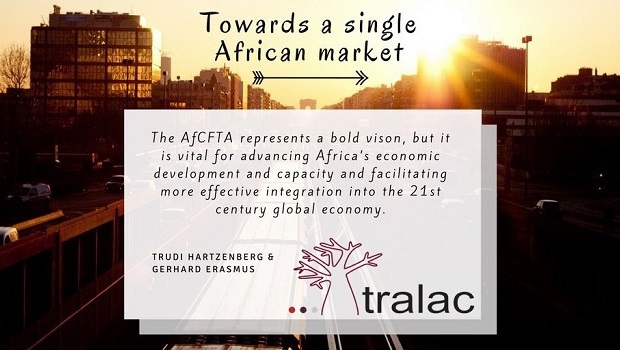