Economic growth in Sub-Saharan Africa will increase modestly in the next few years, thanks to more favourable predictions compared to the negative recent developments.

2016 saw the average annual economic growth rate for Sub-Saharan African countries slowing down to 1.3%-1.4% (lower than half of the global average of 3.1%), with two-thirds of the countries, accounting for more than 80% of the regional GDP[1]; recording slowing growth rates. This is the lowest average in more than twenty years according to the International Monetary Fund (IMF).[2] Nigeria’s economy, one of the largest three economies in the continent, (along with Angola and South Africa); recorded a negative growth rate of 1.5%. Angola’s economy was stagnant and South Africa recorded a mere 0.3% annual economic growth.

Analysts from the International Monetary Fund (IMF), The World Bank, World Economic Forum and The United Nations (UN) are slightly optimistic about the economic growth prospects of Sub-Saharan Africa in short term (2017-2019). The World Bank is anticipating an annual growth rate of 2.6%[3] in 2017 with a continuing yet slow acceleration in the following couple of years.

This economic growth expectation, even though it is almost twice as fast as 2016, is more than 30% below the global growth estimate and of 3.5% and it stays just under the expected population growth for the Sub-Saharan Africa region which is 2.726% according to The World Bank’s World Development Indicators.[4]

We observe the optimism of these international analysts with caution due to a number of reasons. The predictions are based on assumptions, some of which are beyond the control of the governments in the region. These assumptions are mainly:

However, there are potential initiatives in the governments’ planning portfolios that may affect the rate of growth for individual countries and consequently as an average of the whole region. Which, when analysed, may also explain some of the reasons of the dramatic slowdown in growth in 2016.

We focus on public investment in infrastructure in this note.

Energy, Transport, Telecommunications and Water/Sanitation infrastructure projects played a crucial role, as expected, in Sub-Saharan Africa’s development and economic growth so far. The investments on social services that also encourage economic growth, such as, health services, education, urban planning, etc. need the infrastructure in place in order to serve the society effectively.

Investment growth (public and private) has a long-term average of approximately 6% in the region, but it slowed down to 0.6% in 2015 after being close to 7% in consequent three years (2012-2014). Just this reason played a major effect in the economic growth slowdown in 2016.

Further, according to The World Bank’s Africa’s Pulse[3] published in April 2017 the annual public spending on infrastructure was only 2% of the GDP on average between 2009 and 2015. 66.6% of this was on road transport network, and 16.7% was on electricity and water/sanitation projects. The remaining 16.7% was accounted for by all the other infrastructure projects including transport and logistics (other than the road network), other energy (e.g. renewable), telecommunications, health, education and urban planning. 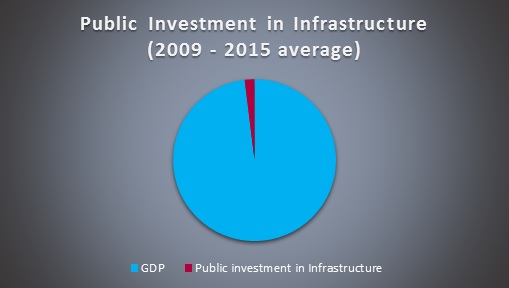 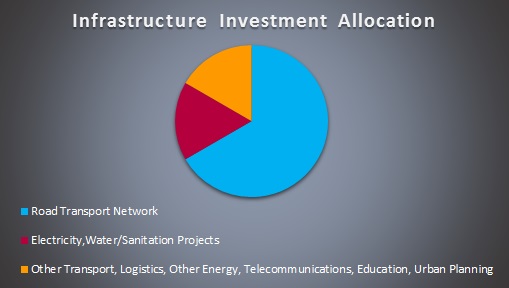 With this level of public infrastructure investment Sub-Saharan Africa has still the lowest road density among developing regions of the world and the electricity generating capacity per capita has changed very little over the last twenty years. The economic growth could be accelerated by closing these gaps in length of the road (and other means of transport); and electricity generating capacity.

The governments of the region need to consider