The National Assembly has passed the Disaster Management Tax Relief Bill and the Disaster Management Tax Relief Administration Bill. The two bills were introduced by the Minister of Finance, Tito Mboweni, together with the Special Adjustment Budget on 24 June 2020. The adjustment budget was promulgated to deal with and minimise the impact of the COVID-19 lockdown, and the resultant economic downturn. Many comments on the bills, said Mboweni, requested additional support, which was followed by the President announcing an expansion of the quantum of the tax relief, which would also apply to a greater number of companies.

Public Works and Infrastructure Minister Patricia de Lille has come under fire from members of Parliament (MPs) for the now infamous Beitbridge border fence. De Lille faced off with MPs from all parties, who raised concerns about her involvement in the project which has now been declared irregular by the Auditor-General. The minister, the SIU and National Treasury on Tuesday briefed Scopa about the failed project valued at R40 million.

Egypt is likely to succeed in its very ambitious plan to increase its exports to 100 billion U.S. dollars annually as the government has been intensifying efforts to lure foreign investments and solve problems that hinder the industrial sector, according to economic analysts. On Monday, Egyptian Trade and Industry Minister Nevine Gamea held a meeting with the chairmen and representatives of the exportation councils to “draw a comprehensive plan for increasing the export rates in different international markets, with giving much focus on Africa.”

US, Britain trade pacts offer markets for crops besides maize for Kenya (The Star) 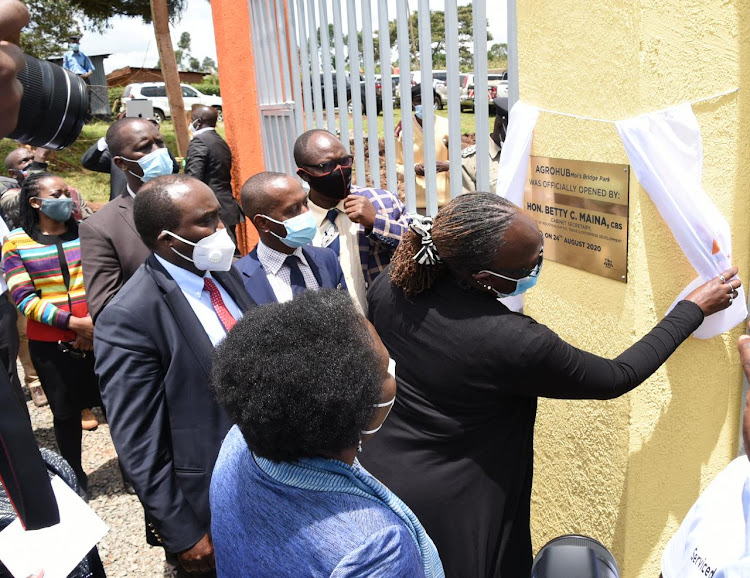 Renewed trade pacts with the US and Britain will expand markets for Rift Valley and other farmers who are increasingly diversifying from maize. Trade Cabinet Secretary Betty Maina said on Monday Kenya is concluding negotiations with the US to provide more trade opportunities and markets.

“Following Brexit, we will do the same with the United Kingdom to create new markets for farmers and other Kenyans engaging in business,” Maina said. Talks on the African Continental Free Trade Area will also create more opportunities and markets for Kenyan products, she said.

The US and Kenyan governments launched negotiations on a free-trade agreement (FTA) between the two countries in early July. We may wonder why the United States chose Kenya to be a model for a FTA, when the continent includes seven of the 10 fastest-growing economies in the world, many of which have equally good relations with the United States. However, Kenya is the one country to have broadly followed mainstream orthodoxy and the economic-liberalisation prescriptions of the Washington Consensus, in which the state’s role in economic activity is minimal.

MAN calls for review of border closure (The Sun Nigeria)

Manufacturers Association of Nigeria (MAN) has called on the Federal Government to review the border closure and put measures in place to guard against ill practices at the country’s land borders. The call is coming one year after the country’s land borders were shut by the Federal Government. The closure was aimed at curbing smuggling. MAN noted that the policy was not sustainable, and urged the government to call stakeholders to a round table meeting and review the achievements so far, while putting in place right structures.

With the long term effect of the closure on the economy, which MAN Director General Paul Oruche said was devastating and a hindrance to the AFCFTA, as trade cannot commence with closed borders, he urged the government to act fast, because businesses were crumbling and stifling the economy. Nigeria’s economy recorded its biggest contraction in at least a decade in the second quarter of the year, a report by the National Bureau of Statistics released Monday shows, reflecting the COVID-19 pandemic’s economic fallout and crash in global oil prices while sparking fears that a recession may be inevitable.

Real gross domestic product for Q2 2020 fell 6.1 percent compared with a growth of 1.87 percent in Q1 2020 and 2.12 percent in Q2 2019, ending a three-year trend of positive real growth rates seen since the 2016 recession. The decline came on the back of significantly lower levels of domestic and international economic activity during the quarter, caused by nationwide lockdowns meant to curb the spread of the deadly coronavirus outbreak, NBS said.

President Akufo-Addo on Tuesday said government is keen on making Ghana a regional hub for financial services. He emphasised collaboration with other Stock Exchanges in growing the performance of the country’s capital market and made reference to the signing of Memorandum of Understanding (MoU) between GSE and the London Stock Exchange last year aimed at transforming the GSE from a frontier market to an emerging one. 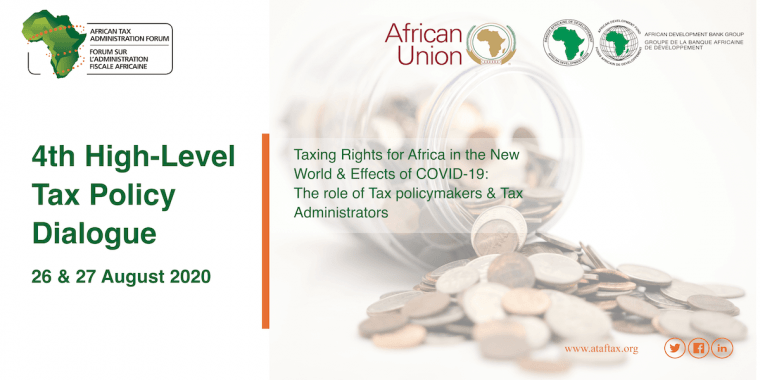 The unprecedented COVID-19 pandemic has demonstrated the inter-linkages between the world’s economies and trade supply chains, and has further revealed the structural weaknesses and vulnerabilities in the economies, social and health systems between and within countries. According to the African Union Commission, Africa’s GDP growth is projected to contract by between -4.9% and -2.1% in 2020, which would lead to a reduction of between US$135 billion and US$204 billion from pre-COVID-19 GDP of $2.59 trillion.

Not only will the impact of the pandemic adversely impact Domestic Resource Mobilisation (DRM) efforts, it will also likely lead to a reduction in overseas development assistance as donor countries face their own cash crunch in the midst of economic turmoil.

In the light of this crisis, it is imperative that African policymakers respond with heightened urgency to the issues raised by the impact of the COVID-19 pandemic on African economies and take a closer look at the proposals for the taxation of the digital economy and their likely implications for revenue collection for the continent’s states.

The Economic Commission for Africa, jointly with International Economics Consulting Ltd, released the report of the second comprehensive survey on the COVID-19 pandemic and its economic impact across Africa. The results of the survey show that the top three challenges faced by companies are: a) reduced opportunities to meet new customers; b) drop in demand, and; c) lack of cash flow. Companies have faced serious disruptions in both supply and market due to COVID-19, with unfair pricing seen as a major concern.

Mr. Simon Mevel, Economics Affairs Officer at the Regional Integration and Trade Division in ECA said: “Very interesting to note that firms involved in goods and MSMEs are displaying the highest shares in terms of new opportunities identified following the crisis, which in turn is expected to be positive from a gender point of view as women are primarily engaged in MSMEs dealing with goods”.

These agility champions are taking a strategic approach to resilience and making tough choices around workforces and cost reduction, while continuing to invest in the key areas that will keep their businesses competitive, including training and upskilling and new technologies, says PwC.

The webinar will hold on Zoom Platform and intending participants can register for free via the link: bit.ly/FPNThrive

Trade is central to development in Africa. A long history of economic thought, theory and practice underpins this proposition. However, I do not seek to interrogate the foundational principles of international trade, but rather to highlight issues that underscore the key role of trade as a driver of growth, sustainable development and poverty reduction. This is not automatic. It requires trade policies that are dynamic, inclusive and responsive to both opportunities and constraints in constantly changing national, regional and global contexts.

Formal trade between African countries is also low, at an average of 15% of total trade during 2016­–18. Africa’s trade challenges are compounded by the strong prevalence of informal cross border trade in both goods and services of even lower value transactions.

WTO: It’s time for an African to lead the World Trade Organization (The Africa Report)

Sub-Saharan Africa is facing its first recession in a quarter of a century. The scale of the economic impact – as in every region of the global economy – will depend on the policies put in place to keep economies afloat and trade moving across continents. That’s why the political networking and lobbying that’s taking place in Geneva right now is so important for the future of the African continent’s economy, globalisation and the chances of a rebound in global trade and business activity.

Africa is becoming a new COVID-19 epicenter. In the recent weeks, South Africa reported a 60% increase in natural deaths, suggesting a higher COVID death toll than reported. And the World Health Organization recently warned that cases are proliferating across Sub-Saharan Africa, including my country, The Gambia. Unless the European Union urgently rethinks its protectionist trade policies – beginning with the Common Agricultural Policy – a sharp uptick in food insecurity will turn the COVID-19 crisis into a catastrophe.

A post-Brexit trade deal between the UK and the EU “seems unlikely” at this stage, the bloc’s negotiator has said. Speaking after the latest round of talks, Michel Barnier said he was “disappointed” and “concerned”.

In a statement released after the seventh round of talks, Mr Frost said the EU had made it “unnecessarily difficult” to make progress by insisting that differences over state aid and fisheries have to be resolved before “substantive work can be done in any other area of the negotiation, including on legal texts”. The transition period ends on 31 December and, if a deal has not been secured by then, the UK would have to trade with the EU on WTO (World Trade Organization) terms.

Based on the resilience of the food supply chain and the import/export trade in key food stuffs, reefer shipping is expected to outpace the broader dry cargo trade according to the maritime research and consulting firm Drewry. In its latest Reefer Shipping Annual Review and Forecast 2020/21 report Drewry expects that reefer shipping will be able to withstand the current economic pressures, but notes that they expect a tightening in the availability of refrigerated container equipment. Drewry forecasts that seaborne reefer traffic will reach 156 million tons by 2024, representing average annual expansion of 3.7 percent, which is faster than the anticipated growth in the wider dry cargo trade.

The World Economic Forum’s (WEF) Global Future Council on International Trade and Investment released a briefing paper that examines the role of trade policy in intensifying action to address biodiversity loss, climate change, and pollution. The paper argues that it is “an imperative to make international trade a central part of the solution” to environmental challenges and to align trade and investment with the SDGs.