Representatives of donor governments will meet from 4-5 December in Centurion to conclude the 15th Replenishment of the African Development Fund with a financing package for Africa’s low-income countries for the period 2020-2022. Representatives of beneficiary member countries will also participate in the deliberations, focusing on the needs and priorities of ADF countries and measures and resources to address them.

Underway, in Doula: ECCAS countries to prepare lists for continental trade in services under AfCFTA

The exercise which will run from 3 to 5 December in Douala Cameroon will be presided over by the Assistant Secretary-General of ECCAS in charge of the Department of Physical, Economic and Monetary Integration. It is meant to technically support the ECCAS Member States in the drafting of convergent regional specific lists of commitments, consistent with the regulatory frameworks, in the African Union’s five priority sectors of services (financial services, transport, telecommunications / ICTs, professional services and tourism). The lists would be submitted to the AU by the start of 2020. More specifically, the meeting will: Promote the appropriation by the Member States of the techniques and tools for negotiation on trade in services within the framework of the AfCFTA; Accompany ECCAS Member States in the definition of convergent positions which would be reflected in the creation of a free-trade area for services in Africa; Build capacity and technically support ECCAS Member States to develop specific lists of commitments that are consistent with relevant regulatory frameworks.

The AfCFTA was a hot topic of discussion. Acting Director of the Office for Eastern Africa of the ECA, Mr Andrew Mold gave a keynote presentation in the dedicated AfCFTA session “Positioning EAC private sector to take advantage of the AfCFTA.” He explained that, despite the region enjoying an impressive growth performance over the last decade, because of the fragmented nature of regional markets, growth was fragile. “Collectively, the regional market is large and expanding rapidly. If measured in purchasing power terms, it is more than 2 and half times larger than is commonly thought. And it is one of the fastest growing sub-regions in the world. Yet the regional private sector is not sufficiently taking advantage of the opportunities, and an excessively large share of the burgeoning domestic demand is being met through imports. That needs to change under the AfCFTA.”

Prudence Sebahizi, head of the AU’s AfCFTA unit, shed some further light on some of the gains from the AfCFTA, and reported preliminary results from a study being carried out by the World Bank, noting that average real income gains across the continent would amount to 7% or nearly $450bn. At the high end, Kenya and Tanzania would both enjoy real income gains of above 10%.

As the field of competitors for investing in Africa becomes more crowded, the EU will have to quickly improve its offer. The challenge for Ursula von der Leyen’s new European Commission will be to turn the so-called ‘partnership of equals’ promised by her predecessor into something concrete. That was the message at the EU/Africa Business Summit in Marrakech, Morocco on 28-29 November where politicians and business leaders urged the new Commission to be more ambitious and make the ‘equal partnership’ pledge made by Jean-Claude Juncker a reality. After lengthy delays caused by the European Parliament rejecting three of her nominees, von der Leyen’s new college of Commissioners only took office last week.

She will make her first foreign trip to Ethiopia on Friday (6 December), where she will meet Prime Minister and Nobel Prize winner Abiy Ahmed in a symbolic move meant to show Europe’s increased focus on the continent. The main building blocks will be finalising the successor to the Cotonou Agreement, the twenty-year-old treaty between the EU and the 78-member African, Caribbean and Pacific Community, which expires next March, the myriad financial instruments which can facilitate more EU investment in Africa, and the slower process of revamping EU-Africa trade relations. The EU is unlikely to offer significant new sources of financial investment. The next seven-year EU budget, known as the multi-annual financial framework, proposed by the Commission is set to increase spending for Sub-Saharan Africa by 23%, from €26.1bn to €32bn, but that would still see the EU spend more on migration control.

Gerd Müller commentary on Germany’s presidency of the EU Council, from 1 July 2020

Nowhere are the opportunities and challenges of our era more evident than in Africa. With a huge potential of young people, commodities and renewable energies, our neighbouring continent will play a large role in determining our future. By 2050, Africa’s gross domestic product may actually exceed those of the EU and the USA combined. Apart from the shifting global balance of power, this is one reason why competition over Africa and in Africa is becoming ever more intensive. Europe needs a new deal with Africa to build the future, and to follow on from the Cotonou Agreement. In this context, I welcome the fact that Ursula von der Leyen, the new commission president, has announced as a top priority the drafting of a new and comprehensive Africa strategy.

During our Council presidency, we want to contribute to the relaunch of the EU’s Africa policy. Germany’s international development policy offers good starting points. By launching the Marshall Plan with Africa, I have initiated a paradigm shift in cooperation with Africa. Taking our lead from the African Union’s Agenda 2063, we are focusing our support on reform-minded governments with an eye to improving governance in areas such as the rule of law, transparency and fighting corruption. By promoting such causes, we are creating the environment for the private sector to invest sustainably, generate more employment and build something like an African “Mittelstand”, similar to the small and medium-sized enterprises that mark the German economy. At the same time, we are leveraging private investments by means of our newly established development investment fund, which will make up to € 1bn available to European and African enterprises.

The Compact with Africa, an initiative started under the German G20 presidency, takes the same approach. The Africa summit in Berlin in November showed what can grow out of this new quality of cooperation with Africa. Several investment agreements were signed with the involvement of international organisations and companies. That kind of experience will inspire our proposals for a new and comprehensive European Africa policy.

Extract: Call upon AU member states, development partners and members of the Continental Business Network to provide adequate resources for the PIDA project preparation facilities: the PIDA Service Delivery Mechanism and the NEPAD Infrastructure Project Preparation Facility, among others.

Encourage partner organisations, as well as bilateral development partners to provide the necessary technical and financial support to the implementation of the second phase of PIDA Priority Action Plan projects by 2030.

Urge the AUDA-NEPAD in consultation with the AUC, and the member states to coordinate continental stakeholders toward the operationalization of the Africa Infrastructure Guarantee Mechanism as a strategic instrument to scale up risk mitigation and mobilize greater investment for PIDA projects.

Welcome the launch of the PIDA Job Creation Toolkit, encourage all project owners, financiers and other stakeholders to make use of the Toolkit and further recommend its continued promotion, development and application in the PIDA PAP 2 process.

Encourage the use of cross-sectoral approaches to promote and demonstrate the economic viability of projects on the continent;

Appreciate the recognition of the tourism sector as one of the five priority services sectors under the AfCFTA and urge the Member States, AUC, AUDA- NEPAD, AfDB and UNECA, to fast track the establishment of African Tourism Organisation in line with the recommendations of Agenda 2063.

Encourage partner organisations, as well as bilateral development partners to promote and provide the necessary technical and financial support for the development and implementation of the Continental Transmission Network Master Plan, INGA 3 Hydropower and High-Speed Rail projects within the framework of the AU Agenda 2063. In the context of the High- Speed Rail Project, and in order to crowd-in private sector financing of rolling stock; encourage Member States to ratify the Luxembourg Rail Protocol.

Exports remain low as a share of GDP; and are still dominated by minerals. We need to increase our export performance. Again, it is for this reason, that the pdf Economic Strategy (1.23 MB) also pays attention to boasting the global competitiveness of our manufacturing sector. This must includes value-addition to our minerals. This is notwithstanding the rise of economic nationalism in the global north associated with trade wars and Brexit. The Economic Strategy has also crystalized many aspects of the NDP. The plan lays the basis upon which we hold each other accountable in our quest to achieve higher and more inclusive economic growth. There are a number of economic growth interventions that the Strategy suggests. These interventions include: [Stats SA: GDP contracts by 0,6% in the third quarter; Daily Maverick: SA’s Q3 GDP contracts 0.6%, heralding a possible recession]

For the second consecutive year, the Netherlands leads UNCTAD’s Business-to-Consumer (B2C) E-commerce Index, followed by Switzerland. The only non-European countries on the top 10 list are Singapore (third) and Australia (10th). The index scores 152 nations on their readiness for online shopping, worth an estimated $3.9 trillion globally in 2017, up 22% from the previous year. Countries are scored on the access to secure internet servers, the reliability of postal services and infrastructure, and the portion of their population that uses the internet and has an account with a financial institution or mobile-money-service provider. The 10 developing countries with the highest scores are all from Asia and classified as high-income or upper middle-income economies. At the other end of the spectrum, least developed countries occupy 18 of the 20 bottom positions. Extracts (pdf):

Table 4 shows the average values by geographic region. There are wide regional differences. In the case of Internet access, only a quarter of the population in Africa uses the Internet compared to three quarters in Western Asia. The relative strengths and weaknesses generally differ. East, South and Southeast Asia needs to boost Internet penetration, which currently stands at just over half of the population and is below world average. In Latin America and the Caribbean, the main opportunities for improvement is in postal reliability. To facilitate more inclusive e-commerce, African countries would benefit from catching up in all policy areas. Compared with the 2018 index, regional values have improved somewhat in Latin America and the Caribbean, Western Asia and in developed economies, while they dropped slightly for Africa and the transition economies. 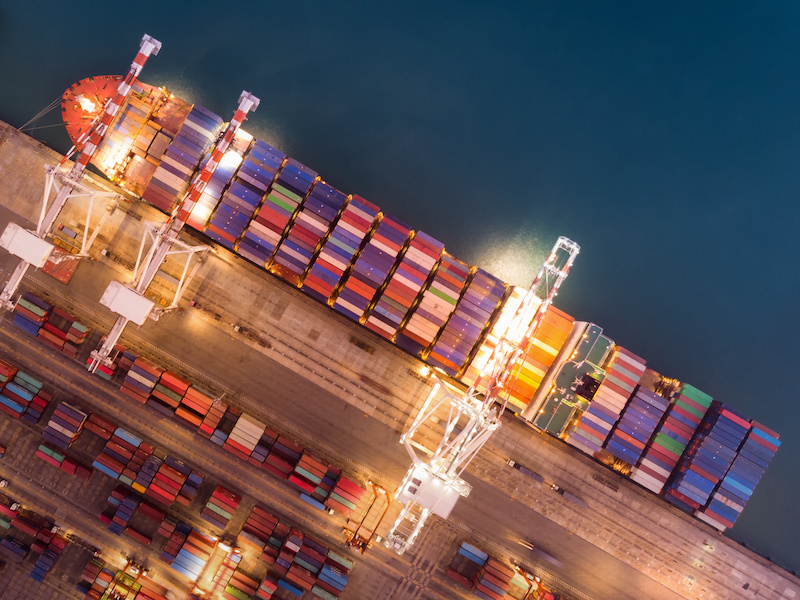