The 17th United States-Sub-Saharan Africa AGOA Forum took place in Washington, D.C. from 9-12 July 2018. The annual AGOA Forum is the premier platform that brings together African Trade Ministers with U.S. counterparts to discuss how they can work together to enhance their trade and investment relationship, including through AGOA Implementation.

The 2018 AGOA Forum Ministerial, held on 11-12 July, fostered discussion of best practices for increasing AGOA utilization, addressing supply-side constraints on trade and investment, and preparing for a more reciprocal trade and investment relationship.

As in previous years, the AGOA Forum included a number of events on the margins of the ministerial. This year’s side events, incorporating private sector, civil society, and African Women’s Entrepreneurship Program (AWEP) stakeholders, will take place on 9-10 July 2018.

Where to for a future bilateral trade relationship between the United States and Africa? 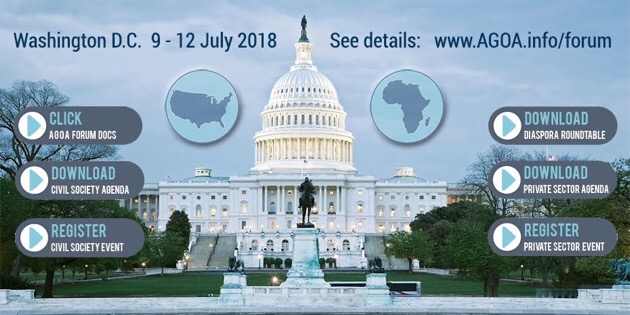 The African Growth and Opportunity Act (AGOA) was signed into law by United States President Clinton in May 2000. The objectives of the legislation include the expansion and deepening of the trade and investment relationship with Sub-Saharan Africa, to encourage economic growth and development as well as regional integration, and to help facilitate the integration of Sub-Saharan Africa into the global economy.

The Act originally covered the 8-year period from October 2000 to September 2008, but legislative amendments signed into law by US President George Bush in July 2004 served to extend AGOA to 2015. After completing its initial 15 year period of validity, the AGOA legislation was extended on 29 June 2015 by a further 10 years, to 2025.

Davies: Steel and aluminium exports to US no threat to national security (IOL)

US steps up its game in Africa, a continent open for business (The Hill)

Africa Matters: Why the U.S. Should Bolster its Trading Relationships with African Countries (UPS)

US Secretary of Commerce, President’s Advisory Council on Doing Business in Africa announce $1bn in deals during Africa mission

pdf 2018 Biennial Report on the Implementation of the African Growth and Opportunity Act (2.18 MB)

Trade in goods between the United States and sub-Saharan Africa increased nearly six percent to $39 billion between 2015 and 2017, according to a report delivered to Congress on 29 June 2018 by the Office of the United States Trade Representative (USTR).

Rising per capita income, growing urbanization, the need for improved infrastructure, and expanding healthcare contributed to growth in U.S. exports in some sectors to sub-Saharan Africa (SSA) between 2010 and 2016, according to the United States International Trade Commission (USITC), an independent, non-partisan, fact-finding federal agency. The report was prepared at the USTR’s request for an investigation examining U.S. trade in goods and services and investment in SSA.

This Recommendations Report from the PAC-DBIA private sector members focuses on some of the obstacles that are of particular pressing concern for US companies in Ethiopia, Kenya, Côte d’Ivoire, and Ghana, and suggests ways to eliminate the obstacles and strengthen US commercial ties with each of these countries.

On 29 November 2017, the President’s Advisory Council on Doing Business in Africa (PAC-DBIA), under the leadership of Secretary of Commerce Wilbur Ross, adopted its Issues Report, identifying the top obstacles US companies face when approaching, competing in, and operating in African markets. The PAC-DBIA advises the President, through the Secretary of Commerce, on ways to strengthen commercial engagement between the United States and Africa.

Last month, the PAC-DBIA joined U.S. government leaders on a four-country trip across Africa. The trip underscored the significant partnerships that the United States has with African nations and the potential for shared economic prosperity. Expanding trade, investment, and commercial ties will create jobs and build wealth for Americans and for Africans. On the occasion of the high-level visit, the U.S. government made significant commitments to further deepen US- Africa commercial engagement and to create pathways for long-term trade and economic partnership.

On September 30, 2025, the World Trade Organization (WTO) waiver that allows the United States to extend trade preferences to African countries under the AGOA will come to an end. This symposium examined the possible future directions of U.S.-Africa trade relations in the post-2025 period. The four contributions to this symposium address a range of issues, including:

Infographic: US tariffs on steel and aluminium