The long-running cross-border trade spat between Kenya and Tanzania has resumed barely four days after the two countries signed a pact removing restrictions that had cost traders billions of shillings by the time it was resolved last Sunday.

The Kenya Association of Manufacturers (KAM) yesterday said Tanzania had maintained a number of restrictions that existed before the Sunday truce, making it hard for Kenyan products to access its market.

Kenya lifted the restrictions it had imposed on Tanzanian wheat flour and liquefied petroleum gas (LPG) while Tanzania removed its blockade of Kenyan milk and milk products, and cigarettes.

But KAM chief executive Phyllis Wakiaga said yesterday that Kenyan traders who had set out to test the effectiveness of the truce had found some of the restrictions intact, bringing into question its execution.

“We were told to export and see whether the restrictions still exist. We have just done that and found that some products such as margarine, ice cream and tobacco can still not access the Tanzanian market,” Ms Wakiaga said.

A stakeholder meeting comprising senior Trade ministry officials and various players in the cross-border trade was held on Monday to brief the exporters on the new developments and Kenyan traders told to ‘test’ whether Tanzania had kept its side of the bargain.

The meeting delved into the long-running trade spat with Tanzania that has often forced manufacturers to return products already cleared for export and duty paid, causing them huge losses.

The trade dispute came into the limelight after Tanzania on June 28 wrote to Kenya protesting the ban on LPG and denial of market access to its wheat flour.

The letter came a week after Tanzania postponed a planned meeting with Kenyan officials to resolve the dispute, insisting that the restrictions on LPG and wheat flour had to be lifted first.

Tanzania then reciprocated by blocking the entry of Kenyan milk (UHT and Cultured), tiles and margarine into its market.

Kenya on Monday announced the formation of a National Standing Committee to look into the various non-trade barriers that Tanzania continues to place on Kenyan products.

Kenyan traders remain opposed to the importation of wheat from Tanzania, arguing that it amounts to dumping as the East African state does not produce the commodity in quantities it would export.

Since Sunday, Kenyan manufacturers have loaded trucks with products destined for the Tanzanian market and driven them to the border to test the truce. 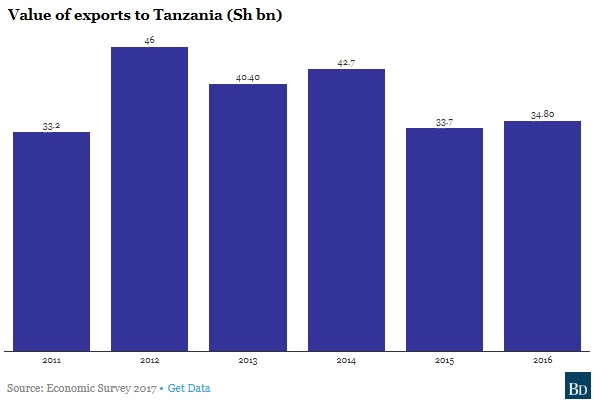 KAM said it was particularly concerned about the plight of manufacturers of perishable products such as milk and margarine that must be sold within 14 days to allow the remaining 75 per cent shelf life but are now stuck at the border.

“It is extremely expensive to keep refrigerated trucks at the border,” KAM said.

Hundreds of trucks were yesterday said to be awaiting clearance from the Tanzania Revenue Authority resident officer in Kenya at the Internal Container Deport in Embakasi, Nairobi.

Tanzania is also said to be loading extra conditions, including a requirement that the products be labelled in Kiswahili and clearance by multiple standardisation authorities on the Kenyan products already certified by the Kenya Bureau of Standards.

In addition to Tanzania Bureau of Standards (TBS), Dar also wants Kenyan importers to get clearance from the Tanzania Food and Drugs Authority (TFDA) – a demand that is costing traders more time and money.

“It is unfortunate that, the product cannot be sold in the Tanzanian market due to TFDA specific requirements on labelling the products to suit the Tanzanian market. If Tanzania applies the harmonised standards then the products can be free to be sold anywhere in the region and the world,” KAM said in a detailed document outlining the ongoing trade barriers between Nairobi and Dar-es-Salaam.

The numerous institutions involved in imposing levies and carrying out inspection of goods from Kenya are said to have recently increased levies by 100 per cent, rendering the products uncompetitive.

Kenyan manufacturers want the levies to be administered by a single agency and payments made available online.