Funding the SDGs in resource-rich countries

Funding the SDGs in resource-rich countries

Degol Hailu and Chinpihoi Kipgen of the United Nations Development Programme (UNDP) recently introduced the Extractives Dependence Index (EDI) to measure a country’s dependence on its oil, gas and mineral resources. The Index is helpful in crafting the right policies for diversification to achieve successful resource-based development.

The EDI is a composite index made up of three weighted components – the extractive sector’s contribution to export earnings, fiscal revenues and GDP – and ranges from 0 to 100 with 100 being the highest dependence score.

The authors examined the three components of the Index for 81 countries globally. They found that in 17 of the 27 Sub-Saharan Africa (SSA) countries analysed in 2011, resource-dependence was driven mainly by export earnings and GDP value-added. However, revenue generation from the sector was comparatively low.

For example, Chad and Oman have similar high EDI scores of about 70, meaning that they are both heavily dependent on their extractive sectors. Chad then scores 89 for its dependence on the sector to generate foreign exchange, compared to Oman’s score of 64.

Similarly, Gabon scored 78 for its dependence on the sector for GDP value added compared to non-SSA countries with similar EDI scores, such as Kazakhstan (53) and Qatar (43).

Both Chad and Gabon were less dependent on the sector for revenue generation, scoring 41 and 53, respectively, compared to an average score of 63 in equally resource-dependent non-SSA countries.

The lower than average dependence on resource revenues in SSA countries does not reflect diversified tax bases as these countries do not generate significant non-resource-related corporate and income taxes.

The fiscal revenue component of the EDI indicates that SSA countries face challenges in raising revenue from the extractive sector in general, posing challenges to finance the much-needed economic diversification and spending on the Sustainable Development Goals (SDGs). 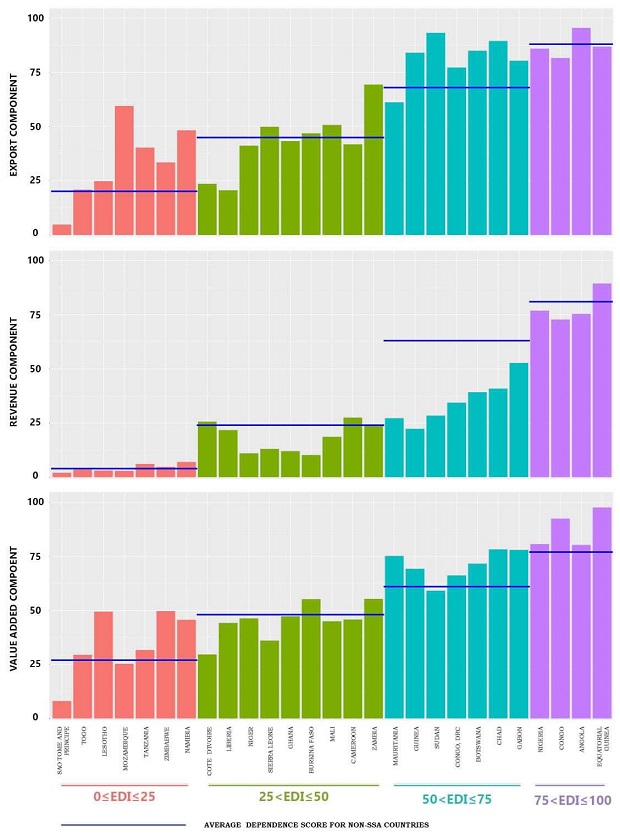 While developed fiscal and administration systems determine the level of revenues, leakages through generous tax incentives, avoidance and evasion have widened the gap between potential and actual revenues collected.

Our own estimates indicate that if resource-dependent countries in SSA collected revenue shares equivalent to that of equally resource dependent non-SSA countries, they would have collected an additional US$11 billion in 2011 alone.

The German Development Institute also finds that even during the most recent commodity boom, SSA resource exporting countries did not collect the potential tax revenues equivalent to about 35 percent of foreign aid.

ActionAid reports that Nigeria lost US$3.3 billion in tax revenues to three oil companies through a series of tax breaks. This was estimated to be twice the size of the country’s entire health budget for 2015.

In 2011, Sierra Leone lost tax revenues equivalent to 14 percent of GDP. This amount was over eight times the health budget and seven times the education budget.

Despite already collecting a relatively lower share of revenues from the extractive sector, in 2013, Guinea cut mining profit taxes from 35 percent to 30 percent.

True. Tax regimes are important to establish a competitive and attractive investment environment. But, provisions of excessively generous incentives are not the only means to attract foreign investors despite their pervasive implementation.

Infrastructure, the ease of doing business, availability of human capital and political stability, for example, have been emphasised in research as well as by the perspectives of mining companies as shown by the annual Fraser Institute surveys.

Historical trends show that commodity prices will rise again. And the good news is that many countries have begun to reform their mining and hydrocarbon policies and legislation to raise more revenues. Supporting these reforms must be a priority to maximize the gains from resource extraction and finance the SDGs.