tralac at the Trade and Development Symposium in Nairobi, Kenya: 15 December 2015

tralac at the Trade and Development Symposium in Nairobi, Kenya: 15 December 2015

Trade facilitation issues and the CFTA
Click here to view all downloads.

tralac participated in the Nairobi Trade and Development Symposium (TDS) organised by the International Centre for Trade and Sustainable Development (ICTSD) in partnership with the University of Nairobi and the Saana Institute, with the support of the Republic of Kenya that took place from 14-18 December 2015 during the Tenth WTO Ministerial Conference in Nairobi, Kenya.

The aim of the TDS was to provide a forum for discussion among government and non-government stakeholders on issues related to the trade and sustainable development agenda, including the rise of Africa, climate and energy issues, food security, natural resources, and emerging governance.

On Tuesday 15 December, tralac hosted a session titled ‘The CFTA: Toward 21st century trade governance for Africa.’ tralac motivates very strongly for new thinking about Africa’s broader integration agenda, and proposes that priority be given to new approaches in areas such as trade in services and trade facilitation. The interconnections between substantive issues must be formalized in the agreement to ensure internal consistency and coherence in the incentives that the agreement will provide for economic agents to make decisions that will in aggregate contribute to achieving the objectives of boosting intra-African trade, expanding productive capacity by developing and diversifying the industrial base and enhancing competitiveness. The importance of a rules-based governance arrangement was emphasised; this requires an effective dispute resolution arrangement with access for private parties to seek redress when required.

A very active discussion raised a number of key issues. The interconnections between the trade in goods and trade in services agenda were emphasised; this requires novel approaches to ensure that the fundamentals of 21st century introduction, production and trade be reflected in the provisions of the agreement.

The future of the regional economic communities (RECs) such as the Southern African Development Community (SADC) was noted; these RECs are most likely to continue to exist alongside the CFTA. This will have important implications for the how the CFTA can build on what has already been achieved in these sub-regional integrational integration initiatives.

The ambition to achieve early harvests has been articulated. This means that the sequencing of the negotiations will be very important; tariff liberalisation negotiations can be expected to be very contentious, as some Member States are concerned about loss of tariff revenue, while others use tariffs to protect domestic industry from import competition. Negotiations on trade facilitation matters may be much less contentious; and it may be possible to make progress much faster in this area, than on tariff liberalisation. This has been the case in the Tripartite Free Trade Area; where, despite the fact that some Member States

The CFTA negotiations will take place in a political economy context; with Member States will articulating their specific offensive and defensive interests. It will be very important to take note of the domestic political and political economy dynamics, and identifying champions for a 21st century CFTA.

A report on the session and background briefs are available to download. 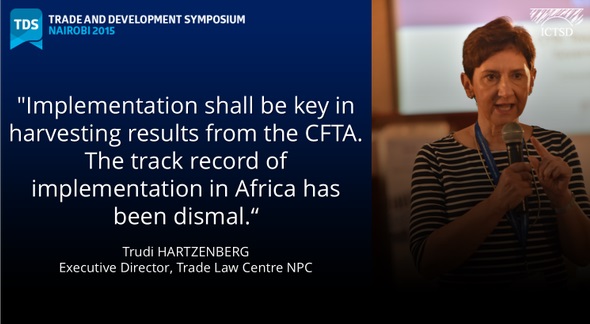 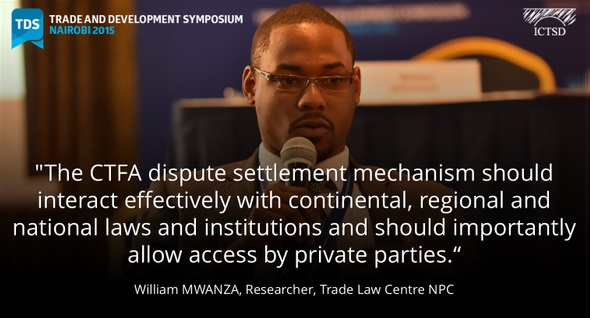 The CFTA: Toward 21st Century Trade Governance for Africa