The face of African agriculture trade

The face of African agriculture trade

In a recent article the Secretary General of the Ports Management Association of Eastern and Southern Africa (Pmaesa), Nosipho Mdawe, asked a pertinent question: ‘why have agricultural exports died in Africa?’ This question has far reaching implications for sustainable development, inclusive growth, poverty alleviation, industrial development and food security for the African continent. According to the Secretary General, Africa has ‘the potential not only to feed ourselves on this continent but to export to the world’; however, currently Africa’s agricultural imports far outweigh exports to the rest of the world. The trade data shows that African countries have been net food importers over the last 15 years. Since 2001 Africa’s agricultural imports account for around 60 percent of Africa’s total trade in agricultural products. Over the last 15 years Africa’s agricultural imports increased from US$ 17 billion in 2001 to US$ 61 billion at the end of 2016. On average, agricultural product imports account for 13.4 percent of the total products imported by African countries over the last 15 years, while agricultural exports account for 9.16 percent of total African exports over the same time. 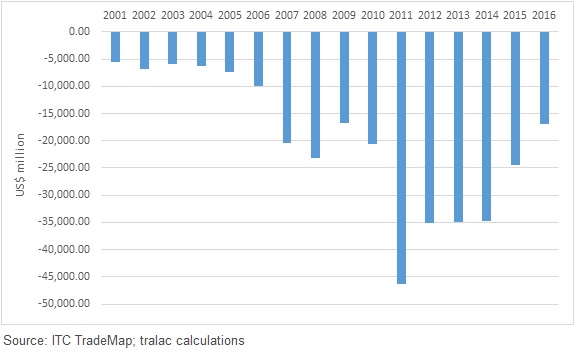 So what did African countries import over the last 15 years?

It is interesting to note that African countries import numerous agricultural products which are also produced on the African continent. More concerning is that many products being imported are products which are highly protected in African countries; deemed sensitive products (like wheat, maize and sugar) of vital importance for economic inclusive growth and development. The high incidence of imports for these products has been attributed to the inability to produce enough to satisfy growing local demand due to low yields and relatively low levels of productivity. Furthermore, over 80 percent of Africa’s agricultural products are being produced by smallholder farmers who produce 70 percent of the continent’s food supply. If we look at exports, African countries mainly export cocoa, edible fruit and nuts, coffee and tea and vegetables to the rest of the world. The main agricultural importing countries are the United States, China, Germany, Netherlands and the United Kingdom. African countries do not feature under the top supplying countries for any of these markets. If Africa is serious about changing from net food importers to net food exports it becomes a question of increasing Africa’s ability to do just that – addressing supply side constraints first; including innovation in production technology, the cost of inputs (energy and fertilizers), management of changes in climatic conditions (e.g. access to water through irrigation), knowledge transfer and capacity building, investment in agriculture and agriculture-related infrastructure (credit facilities, transportation networks, cold-storage facilities and communication networks) and access to information.

Sunga, I. 2017. These 5 innovations will transform the lives of smallholder farmers. https://www.weforum.org/agenda/2017/01/these-5-innovations-will-transform-the-lives-of-smallholder-farmers